Pacific Rim Is Not Your Average Action Juggernaut

The dismal state of this summer’s blockbusters is multidimensional: not only did big-budget films generally perform poorly, but they also were conceptually and emotionally hollow. The Lone Ranger didn’t seem to understand why Johnny Depp in redface could possibly be a bad thing, and the failure of the Smith-Smith-fronted After Earth to draw in crowds boggled the minds of film studios everywhere. When the promising prospect of Elysium turned out to be a moralistic bull in a china shop, the summer sci-fi set seemed doomed.

Is there anything to salvage from this black hole of summer cinema? I think there is: Guillermo del Toro’s Pacific Rim, which stands out from the crowd of half-baked action/sci-fi juggernauts for one reason: it knows what it is. It knows that it’s a visually-amazing action flick– but what’s even more interesting is that it knows how to subvert pieces of the genre other films blindly pay homage to. In particular, Pacific Rim has a way of smashing gender-based action movie tropes like they’re Kaiju skulls.

Pacific Rim has its fair share of problems. It doesn’t pass the Bechdel test: There are only two female characters who have names, and only one of them is a major figure in the story. The other has less than five lines in total. The main Jaeger’s name is “Gipsy Danger”– a racial slur that is not essential in any sense but is used anyway. For an international film set in Asia, there sure are a lot of white people running around (perhaps less than other action movies, but let’s be honest: that’s a low bar).

Acknowledging those points of weakness, however, Pacific Rim is very progressive in portraying unconventional versions of typical action heroines/heroes.

Let’s begin with Mako Mori. Mako (played by the fabulous Rinko Kikuchi) is the main character of the film. You might be asking– “wait, isn’t Raleigh Becket (Charlie Hunnam) the main character?” Well, yes and no. Raleigh is the protagonist whose perspective we follow throughout much of the narrative, but Mako is the main character. She is the the crux of the story, the one we cheer for, the one whose story we learn and troubles we care about. Raleigh is our point of reference, but Mako is what binds the rest of the characters in the story together. So we’ve got a female main character of color who is incredibly smart, observant, capable (she can beat up Raleigh in a one-on-one match and also manage an entire Jaeger restoration program), determined, and passionate, who goes on a Campbellian heroic journey.

Raleigh is her messenger, who calls Mako to action by encouraging her to pursue becoming a Jaeger pilot even against Marshall Stacker Pentecost’s (the ever-amazing Idris Elba) insistence. Her crossing of the threshold is her trial with “chasing the rabbit” on her test-run in the Jaeger– after that point she is Gipsy Danger’s pilot in truth, even despite the fraught circumstances of her first piloting attempt. Her test is the fight to protect Hong Kong from the dual-Kaiju attack, the final battle is the rift-closing mission, and her re-emergence into the world is through the escape pod. Raleigh may also have his own version of the monomyth narrative in play, but Mako is as much of a Campbellian hero as he is– which is often ignored and worth noting. Pacific Rim is both of their stories, happening in concert with one another.

Furthermore, Mako is never sexualized for fanservice. All of her clothes are practical and analogous to the ones her male counterparts wear, and there is no gratuitous undressing scene (I’m looking at you, Star Trek: Into Darkness). It’s a sad state of affairs where not sexualizing any woman who walks on screen is a rare and commendable aspect of a movie, but what can you do? That’s not to say you can’t have a sexually-realized heroine who is an empowered character, but for Mako anything in that sexually-charged vein would be out of character. She is a soldier of the “resistance” fighting to avenge her family first, and everything else comes second. By the same token, she isn’t a cardboard character– she may be focused on achieving her goals, but she’s not single-minded in the way some two-dimensional characters are. That’s because Mako isn’t two-dimensional. She’s as nuanced as Stacker and Raleigh are, if not moreso. Mako is a complicated lady. Del Toro himself said:

One of the other things I decided was that I wanted a female lead who has the equal force as the male leads. She’s not going to be a sex kitten, she’s not going to come out in cutoff shorts and a tank top, and it’s going to be a real earnestly drawn character… One of the decisions we made as we went along in the process of the movie was, let’s not have a love story. Let’s have a story about two people. 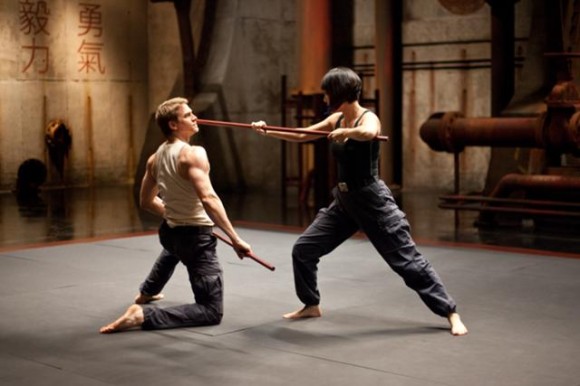 Raleigh (despite the white-bread action-man appearance) is also a structurally-interesting character in his own way because he displays something very unconventional for an all-American action movie tough guy– emotional intelligence. Tumblr user Grimalkina wrote an apt summary of what makes Raleigh distinct among all of the white heterosexual male action heroes out there, but I think they really hit the nail on the head with this passage in particular:

What does Raleigh see? Freaking everything. What’s your story? he asks Mako, and he never stops asking, never letting her get away with not living up to her true potential. He affirms that her desire to fight is hers to own, that their connection is real. Why are you holding her back? he asks Pentecost, forcing him to confront the difficult tension between wanting to protect someone, and letting them be a hero… He guides Mako through her difficult memories, which become the emotional touchstone for the movie. Her experience, not Raleigh’s experience of losing his brother, and he seems happy to talk about her story over his own. It’s a degree of emotional intelligence that is usually defaulted to supportive female characters.

The fact that he is not portrayed as any less of “a man” for being emotionally available and interpersonally cognizant is worth mentioning. He easily could have been written as a dark and brooding figure: he’s got a tragic backstory and the weight of the world on his shoulders, but everything he does is an outward, extroverted motion to try and do something good for the world. Whether that “good” is battling Kaiju or helping Mako make her wish to become a Jaeger pilot a reality (or punching Chuck Hansen in the face) is another story.

On the topic of Mako and Raleigh, their relationship is one of the few representations of a close, emotionally-intimate male-female friendship that never turns physical. Upon first watching the film all the way through, I was continually waiting for him to kiss her and the music to get sweeping and explosions to go off in the sky behind their heads.

How many action movies have a romantic subplot? Pretty much all of them. How many have a strong platonic relationship between a man and a woman that does not involve heaping piles of sexual tension? Very few. It’s sad to say that the lack of romantic subplot was refreshing, but that speaks to the staying power of the action-movie-romantic-interest genre trope. Mako is so much more than that, and the film honestly does treat her as such.

Pacific Rim is also one of the only big-budget mainstream Hollywood representations of female gaze I’ve seen in an action film for quite some time. The only ogling that happens in the whole movie is when Mako sees Raleigh shirtless through the peephole on her door. Raleigh himself (and Yancy, momentarily) are the only people who are shown in any state of undress. Not only does the main female character have a represented gaze, but so does the female (and otherwise generally male-attracted) contingency of the audience. A while back we posted about Legendary Pictures’ president saying that the fanboy demographic is no longer primarily men— Legendary Pictures is the company that put out Pacific Rim in the first place, so the production team was obviously aware of the  audience they are addressing.

Compare this to the aforementioned scene from Star Trek: Into Darkness, where Kirk is standing right next to Carol Marcus watching her undress in the most overtly fanservice-y way possible. Star Trek played directly into assumptions about what the perceived audience wants, operating on old ideas about who is going to see big-budget sci-fi films. Pacific Rim is smart because it’s self-aware, particularly with regards to how it treats the characters on-screen.

I could go on about other, smaller facets that carry representative weight (for example, the importance of Stacker Pentecost’s working-class British accent making the grand proclamation “We’re cancellin’ the apocalypse!”, or the loving interracial non-nuclear family unit formed by Mako and Pentecost), but I think the last important takeaway I should mention is the overall message of the film. Defeating Kaiju is not a one-man job. Within the Hong Kong Shatterdome there is a constant collective presence– the mechanics maintaining the Jaegers, the scientists researching furiously, the technicians in LOCCENT monitoring every happening. Even prior to Raleigh’s arrival in Hong Kong we get a sense of the global scale of the situation and how it affects peoples’ lives though the workers building the wall, or the worldwide news reports, or the civilians who find Raleigh almost-dead on the beach. The focal point of the story is a collective one as told through the experience of Mako and Raleigh, who just happen to be at the center of it.

Too often is the world-saving business a one-man job. I say “man” because it is almost always one man, “the chosen one”, who must bring peace back to a hopelessly gritty world: The Matrix, The Lord of the Rings, Harry Potter, Superman. There might be a few other primary characters, but otherwise the rest of the population is just a giant collective damsel in distress. What makes this film particularly emotionally nuanced is how much attention it gives to the people who enable the heroes/heroines to do their grandiose world-saving. In this way the message of Pacific Rim‘s story is communal: cooperation, aid, appreciation for the efforts of others.

Considering the feminization of communal tendencies (attention to social situations, concern for others, and cooperation over competition are all tinted with “gendered esoteric concept-glasses”) the fact that a big-budget Hollywood action movie (stereotypically the most masculine genre) is paying extra attention to such “feminine” values certainly makes Pacific Rim stand out. It may be a film about bashing Kaiju heads with giant mechas and the spectacle thereof, but the reason it’s not just another pseudo-intellectual action movie summer flop is because it has a heart as well as visual muscle. Let’s hope it won’t be the last of its kind.