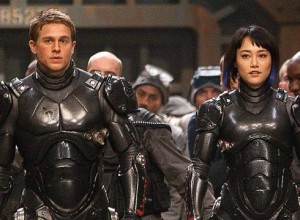 “I was very careful how I built the movie. One of the other things I decided was that I wanted a female lead (Babel’s Rinko Kikuchi) who has the equal force as the male leads. She’s not going to be a sex kitten, she’s not going to come out in cutoff shorts and a tank top, and it’s going to be a real earnestly drawn character…One of the decisions we made as we went along in the process of the movie was, let’s not have a love story. Let’s have a story about two people.” Director Guillermo del Toro on how Pacific Rim deviates from typical summer blockbusters, and how Mako Mori, played by Rinko Kikuchi, will be a formidable, complex character.

Pacific Rim continues to be compared to blockbusters like Transformers, but, if the focus on characters in the most recent commercials wasn’t evidence enough, Guillermo del Toro has set the record strait in his interview with The Star.  Pacific Rim is not a movie set to exploit its female lead or compromise her character any more than it will its male lead, and del Toro stresses that he made decisions at every turn to make sure his Kaiju versus Mecha movie didn’t become just another summer movie. It’s looking more and more like Pacific Rim will focus on adventure and interesting characters, without falling into the glorification of violence and two-dimensional characters that movies like Transformers lead us to expect in our giant-robot-filled summer films. Finally we can watch giant monsters fight Mecha and watch an interesting story unfold!