Plus you'd have to watch a bunch of basketball. 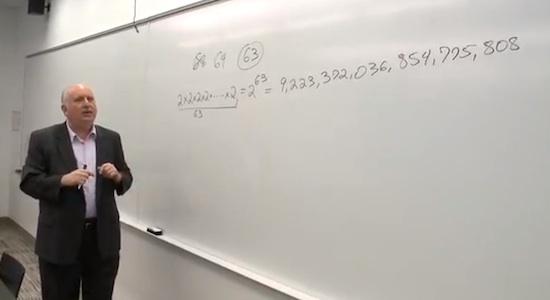 It’s that time of year again, when chances are that some of you have been finagled into filling out a bracket for the NCAA March Madness Tournament. While this probably made sense to our readers who enjoy college hoops, for many of you, it was probably just an exercise in being cornered by a co-worker who talked very quickly, handed you a sheet of paper and took five of your dollars, an experience much like being mugged but with less bruising. If you’re intimidated, don’t be. In the interest of taking the pressure off, it helps to recall that it is statistically impossible to fill out a perfect bracket, so you’re just as well off having fun with it. Isn’t that a load off?

Granted, this video from DePaul University math professor Jeff Bergen is from last year, but the math holds, showing that there are no less than nine quintillion ways to fill out a perfect bracket. Quintillion. With a Q and eighteen zeroes. All of a sudden, your odds look a lot… well, not better, but at least more even. And that’s something.

Oh, and if you want to genuinely stand a chance of not embarrassing yourself in front of your friends and co-workers and make sure you stay out of that last place spot, head on over to our friends at SportsGrid, who will be happy to get you up to speed.

[Update: Originally we had Professor Bergen’s name as “Jay Bergen”. It is Jeff.]