Paleo-Bracketology: You Can Help Name The Earliest Common Ancestor Of All Mammals 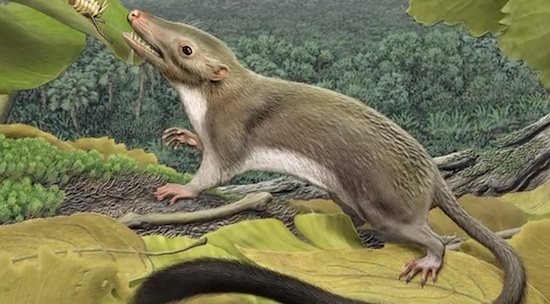 Earlier this month, researchers at the American Museum of Natural History and several other institutions announced that they had constructed a model of the first mammal that is a common ancestor to all other mammals, showing that creatures as disparate as whales, humans, and Grumpy Cat all descend from a small, rat like creature that evolved shortly after the extinction of the dinosaurs. Now that all the heavy lifting of constructing a model of this earliest mammal is done, researchers want you to step in for the fun part and help name the hypothetical critter by voting in a March Madness-style tournament.

Right now, the creature is going by the less than catchy title of “hypothetical placental ancestor,” which I think we can all agree doesn’t exactly have a ring to it. The name is functional, though, emphasizing that the furry little creature described in the work is not an actual fossil that the team has discovered, but a hypothetical amalgam of what they believe that creature would look like judging by painstaking genetic analysis and evidence suggested by similar fossils.

The AMNH, which acted as home base for the research, is teaming up with the folks at Radiolab to take suggestions, and they want you to submit your best names for the rat-like insectivore that is mother to us all. It will probably a Star Trek inspired one, if recent naming contests are any indication, as we will apparently name any new scientific discovery whatever William Shatner tells us too, given the chance. Not that there’s anything wrong with that!

To throw a name in the hat for the mother of all mammals, you can tweet your suggestion with the hashtag #nameyourancestor. If you don’t feel like going on the public record with your suggestion, though, that’s fine, too — you can just email [email protected] with a suggestion. You’ve got until March 5 to make your initial recommendations — after that, the top names will be put into a March Madness-style bracket and you can vote on your favorites in a series of elimination rounds that give paleontology nerds something to do while everyone else is watching college basketball next month. And when you are making suggestions, keep in mind that they’re looking for a common name, not a scientific one like Homo sapiens. Since, you know, this creature is still hypothetical and all.

Let us know what you think our oldest relative should be named in the comments or on our Facebook page!