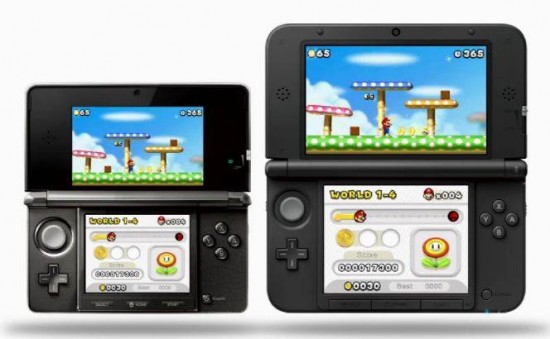 “Your handheld gaming experiences will be more intense and more engrossing than ever before,” said Nintendo of America President Reggie Fils-Amie in a pre-recorded video that was made available Thursday night. He is referring to Nintendo’s new handheld called the 3DS XL (known as the 3DS LL in Japan). Announced as a co-sessor to the 3DS, much like the DSi XL before it, it will be the same hardware you know and (possibly) love from the 3DS, but with bigger screens — 90% bigger screens to be exact.

The 3DS XL will be coming to stores on the North American release date of August 19th, for $199, alongside New Super Mario Bros. 2.

With the increase in screen size comes an increase in form factor. The larger size means a larger battery, which boasts roughly a half hour increase in play time on both ends of the scale, you will now be able to game from an estimated 3.5 hours to 6.5 hours (up from the original’s 3 to 6 hours). An increase in battery life is definitely a welcome feature, but at only half an hour extra, it seems most of that battery will be spent powering the larger displays.

Other changes include separate physical buttons for select, start, and home (still in the same, slightly out of the way location) as well as a new DSi XL style power button. The handheld itself also appears to be furnished in the same matte finish on the interior as the DSi XL.

While all this new stuff is exciting, it’s important to note the things that have not changed. The top screen is still a widescreen aspect and the bottom screen is still square. The passive 3D feature will also, of course, only be on the top screen (the degree of 3D slider remains as well). Larger screens do not mean a resolution bump either. Instead, they will be the same resolution as the stock 3DS, providing a potentially clearer yet more pixelated image.

Perhaps most surprising is the lack of a second circle pad. While the Circle Pad Pro accessory hasn’t been a huge hit, it was one of the most widely speculated additions for a 3DS refresh.Will release an updated, even more massive 3DS XL compliant Circle Pad Pro? What about an oversized stand for Kid Icarus: Uprising? Perhaps most importantly, will it come with a giant stylus?

While released imagery so far has only depicted a black or white 3DS XL, fans out there are surely holding their breath for the elegant burgundy and brown colors of the past.

Here’s a quick rundown of the new XL’s specs:

So, what do you think? Were you on board day one with the 3DS or did you take a wait-and-see approach for the inevitable hardware refresh? Will larger screens be enough to sway you or did you want that built-in second circle pad? Maybe that extra half hour of battery life is enough? Let us know in the comments below!