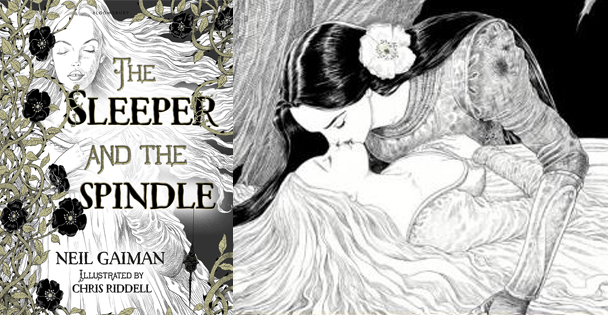 Neil Gaiman continues his streak of standing up for women in genre and just generally being the best by including a same-sex kiss between awesomely-developed characters Sleeping Beauty and Snow White.

Gaiman’s new children’s book, The Sleeper and the Spindle, out on October 23rd, is “a thrillingly reimagined fairy tale” which weaves together “a soft-of Snow White and an almost Sleepy Beauty with a thread of dark magic.” Illustrated by Chris Riddell, the book follows a young queen who sets out to rescue a princess from an enchantment.

She casts aside her fine wedding clothes, takes her chain mail and her sword and follows her brave dwarf retainers into the tunnels under the mountain towards the sleeping kingdom. This queen will decide her own future – and the princess who needs rescuing is not quite what she seems. Twisting together the familiar and the new, this perfectly delicious, captivating and darkly funny tale shows its creators at the peak of their talents.

Which all sounds awesome, for sure, but the real headline here is the women of the tale don’t require men to be the heroes of the story.

Suran Dickson, the CEO of Diversity Role Models, said “The Sleeper and the Spindle simply shows that not every princess will be awoken by a prince. This helps children understand different relationships, as well as giving representation to those young people with same-sex parents and can therefore reduce bullying.”

A spokesperson for Bloomsbury told Gay Star News “While it is not a gay story in itself there is much to be said about having a female kiss not only described but illustrated in a book for young readers.”

Sleeping Beauty being saved by Snow White? Sign me right the hell up.