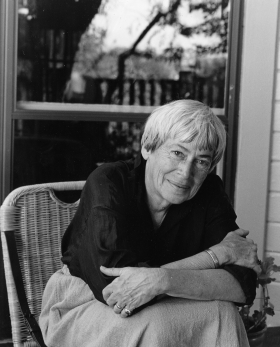 On November 19th, beloved author Ursula K. Le Guin will join the ranks of Ray Bradbury and Arthur Miller when she receives the National Book Foundation’s Lifetime Achievement Award in honor of her contribution to “American literary heritage.” The award will be presented to Le Guin by Neil Gaiman, because sometimes the world is a beautiful and fantastical place.

The NBF’s press release explains why 84-year-old Le Guin was selected as recipient of the Distinguished Contribution Medal:

In recognition of her transformative impact on American literature, Ursula K. Le Guin is the 2014 recipient of the Foundation’s Medal for Distinguished Contribution to American Letters. She is the Foundation’s twenty-seventh award recipient.For more than forty years, Le Guin has defied conventions of narrative, language, character, and genre, as well as transcended the boundaries between fantasy and realism, to forge new paths for literary fiction.

Among the nation’s most revered writers of science fiction and fantasy, Le Guin’s fully imagined worlds challenge readers to consider profound philosophical and existential questions about gender, race, the environment, and society. Her boldly experimental and critically acclaimed novels, short stories, and children’s books, written in elegant prose, are popular with millions of readers around the world.

Le Guin’s desire to see more diversity in fantasy is just as relevant today as when her career first began. As she’s quoted saying in Elisabeth Anne Leonard’s book Into Darkness Peering,

Not to choose, these days, is a choice made. All fiction has ethical, political, and social weight, and sometimes the works that weigh the heaviest are those apparently fluffy or escapist fictions whose authors declare themselves ‘above politics,’ ‘just entertainers,’ and so on.

Congratulations to the author who famously challenged “why everybody in science fiction had to be a honky named Bob or Joe or Bill [….] why everybody in heroic fantasy had to be white.” Now, do you think we could get an invitation to the fantasy author after party? We’ll behave, I swear!