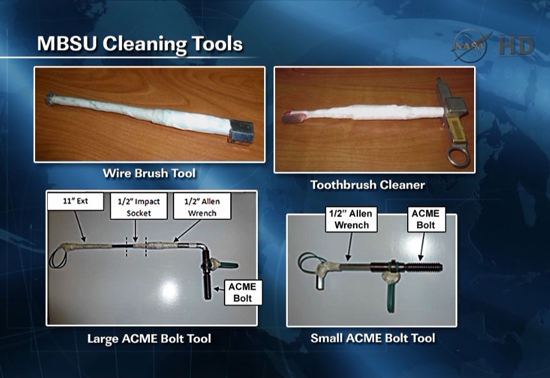 The International Space Station requires maintenance just like any other piece of technology. After astronauts Sunita Williams and Akihiko Hoshide failed to install a new main bus switching unit (MBSU) last week due to stuck bolts, workers at NASA’s Johnson Space Center brainstormed on various ways to solve the problem. In the end, the astronauts had to construct improvised tools to get the job done. These tools included, among other things, a spare toothbrush.

It appears that the issue plaguing the installation was metal shavings in the MBSU’s receptacles for the bolts. Using their improved tools, including the toothbrush, and a pressurized can of nitrogen gas, Williams and Hoshide were able to successfully install the unit around four hours into the spacewalk. Not to be deterred, the duo then went on to replace a faulty camera before turning to the airlock.

In addition to being a bit awesome due to its ingenuity, this particular spacewalk also saw Sunita Williams overtake Peggy Whitson as the record holder for most time spent working in the vacuum of space by a female astronaut.