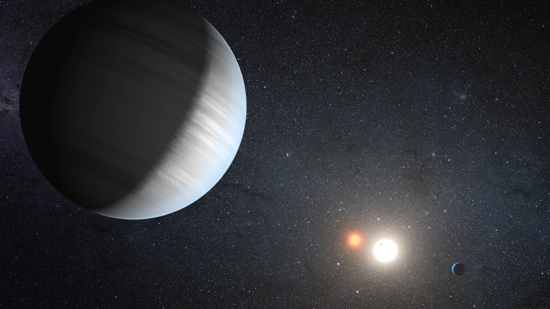 Turns out that what we thought we understood about planetary formation may have just been thrown out by NASA‘s discovery of Kepler-47, the first circumbinary planetary system ever discovered. The current theories on planetary formation in a system with two stars would make this an exceedingly rare occurrence, which means we may not yet fully understand exactly how planets come to exist in the vast reaches of space.

To make matters yet more interesting, Kepler-47c is within a habitable zone where liquid water might exist. Unfortunately, Kepler-47c is also larger than Neptune, which places it in the gaseous giant family of planets. Gaseous giants aren’t known for being conducive to the formation of life. That doesn’t rule on the potential for a moon that could have liquid water on it, though. 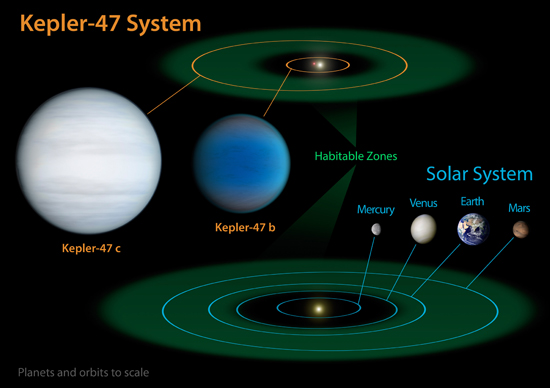 The inner planet, Kepler-47b, orbits its two suns in fewer than 50 days, while the larger Kepler-47c does so in 303 days — thus why the inner planet isn’t habitable. Between the two stars, one is near the size of the Sun but only 84% as bright, and the smaller star, a red dwarf, is a mere third the size of the Sun and less than one percent as bright.

Though many are likening this discovery to the fictional planet Tatooine from Star Wars, Kepler-16b, which was discovered last year, fits that bill better. Instead, NASA says that, “Kepler-47c suggests a different possible scene: our hero standing on a moon, gazing at a double sunset, with a Neptune-class planet rising behind her.”