Arctic Sea Ice at Lowest Levels Ever Observed from Space 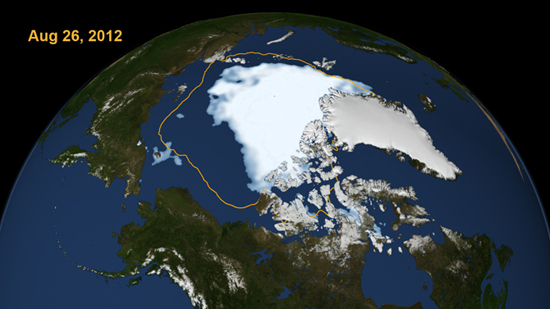 The polar caps have been under consistent surveillance from space since 1979. There’s a certain area scientists refer to as the Arctic’s “minimum,” where it shrinks down to on a regular basis during warmer weather, before colder climates prevail and rebuild the sheet of ice. However, NASA has revealed that the extent of melting as of yesterday, August 26th, has set the new record as the lowest level of Arctic sea ice observed since we started doing such a thing.

Specifically, the image above shows where the “minimum” should be (indicated by the yellow line) and then the ice present is what we had covering the area on August 26th. That isn’t to say that the water level has been rising; ice floating on top of water generally displaces the same amount of weight as it would if it were just extra water. The problem would be if land ice started to melt, as that’s water not usually adding anything to the current level.

The area of the ice in the image, as measured by the “Special Sensor Microwave/Imager on the U.S. Defense Meteorological Satellite Program spacecraft,” came out to a solid 1.58 million square miles. That might sound like a lot, but it’s actually a loss of 27,000 square miles from the September 18th, 2007 reading of 1.61 million square miles — which held the previous record for lowest observed levels.

It gets worse: There are still a few weeks left in the melting period. The levels will almost assuredly get lower before the sheet begins to grow back.