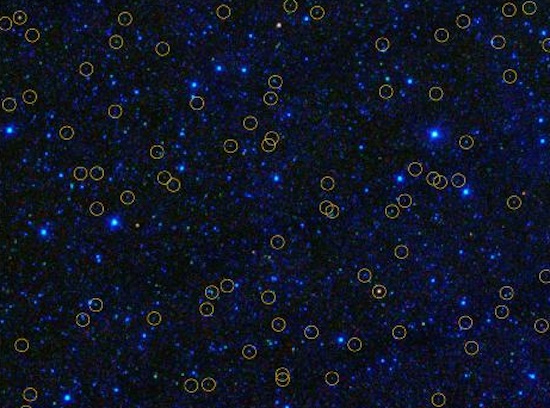 NASA was teasing some big news about black holes yesterday, and this afternoon, we know what that is. The Wide-field Infrared Survey Explorer (WISE) space telescope has found millions of black holes dotting the universe, as well as more than 1,000 of the brightest galaxies ever observed, which have gone unobserved until now because they are shrouded with dust that has hidden them from view. This despite the galaxies in question being as much as 100 trillion times brighter than our Sun.

The WISE telescope finished two infrared scans of the entire night sky and released the data to the public last year. That new data is taking time to parse, though — remember, this is the entire sky we’re talking about — and the studies released today mark some of the first major finds from the mission. And oh, boy, but this is some awesome space telescope data

The coolest part of the new findings for anyone intrigued by black holes  — and let’s face it, who’s not intrigued by the remains of a collapsed star that pulls in everything near it, not allowing even light to escape — are the more then two and a half million new black hole candidates. Not all of these will end up being black holes, but the ones that do have the potential to teach us a ton about how black holes form and how they act throughout the course of their life cycles.

The 1,oo0 super bright galaxies may also have a lot to teach us about the life cycles of cosmic objects. These rare galaxies are veritable nurseries for stars, even while supporting supermassive black holes at their center, and could hold some interesting insights on how galaxies are born. JPL researcher and study author Jingwen Wu said in a statement “we may be seeing a new, rare phase in the evolution of galaxies.”

The WISE mission also has to be awarded bonus points for naming these hot, bright, objects Dust-obscured galaxies. If that’s too much of a mouthful, you can just go with the acronym — hot DOGs.