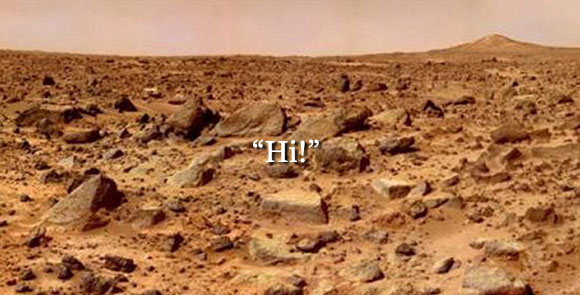 First there’s the Curiosity Mars rover. Then the news that scientists might have figured out the warp drive. Then a pyramid on Mars. And now NASA tells us that it’s considering building a base on the far side of the moon to help facilitate exploration on the Red Planet. World, you’d better not be jerking me around with all these exciting space travel developments.

NASA’s proposed “gateway spacecraft” would be located at Earth-Moon Lagrange Point 2, which is 38,000 miles past the moon and a full quarter-million miles further away from Earth than the International Space Station. That particular spot is where the gravitational pull of the planets balance each other out, meaning the spacecraft could basically just hang out there instead of having to orbit like the ISS does. The proposed base would be an ideal place from which to send communications directed far out into space, study nearby asteroids… and send astronauts to Mars.

That’s right. Decades after the first moonwalk, we humans might finally be going to Mars. Better late than never.

The report that proposes the base doesn’t mention how much it would cost, which is a problem, as NASA is facing budget cuts and I’m guessing it won’t be cheap. There’s also the fact that stationing astronauts that far away from Earth, whether permanently or for temporary missions (the report doesn’t specify), is pretty dangerous, both because of exposure to deep space radiation and the difficulty of sending rescue and supply missions.

Still, it could happen. There could be human walking around on Mars within the next decade or so. Whoever gets there first, can you give Curiosity a hug?