Well, pyramid-shaped rock. They should be going easier on the lil’ guy lest he develop a complex.

In addition to taking this opportunity (as I always will) to remind everyone that the 1994 Stargate movie exists, there isn’t much to say. This really is news, and significant news at that, about a rock. Its distinction comes from the fact that it will be the first rock analyzed by Curiosity, using a particle X-Ray spectrometer, and some laser equipment. Why this rock? Well, because it appears to be of unknown origin. The variation of bands on its side has scientists at NASA, well, curious as to where it came from.

So many questions unanswered, however, hasn’t prevented us Earthlings from doing what we do best; naming stuff. The rock has already been dubbed “Jake Matijevic”, named for the former surface operations systems chief engineer who, unfortunately, passed away on August 20th. 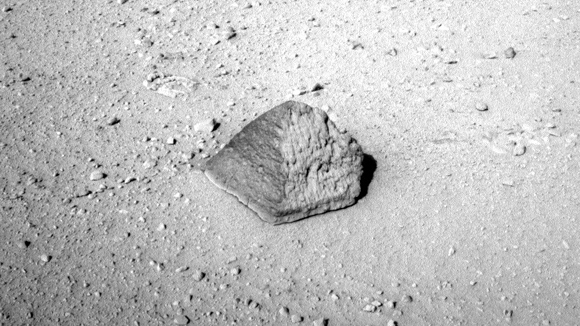