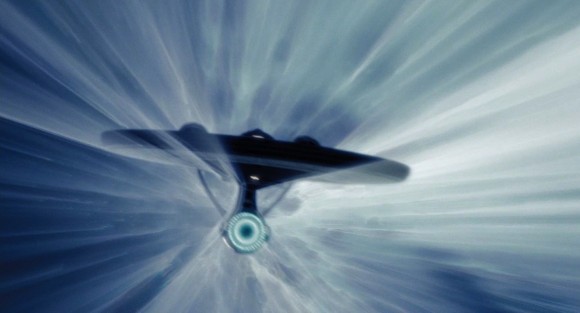 Well, we already have communicators and hyposprays; Microsoft is working on the Holodeck; and now it looks like humanity might invent the warp drive in the (probably still not very near) future.

Physicist Miguel Alcubierre suggested the concept for a real-life warp drive, which would allow a football-shaped spacecraft to reach faster-than-light speeds by warping an area of space-time around it, all the way back in 1994, but the amount of energy required to run the drive (estimated to be, at minimum, equal to the mass-energy of Jupiter… so, you know, quite a lot) made the whole thing pretty unfeasible. Luckily for the future of space travel, NASA’s Harold “Sonny” White figured out that if the exotic-matter ring around the spacecraft took the shape of a rounded doughnut (mmm, doughnuts… delicious space travel), the amount of energy required would be more along the lines of the mass of the Voyager 1 probe launched back in 1977 and could even be made less if the intensity of the space warp bubble were to be oscillated.

Experiments are already underway at the Johnson Space Center, but we’ll have to wait a while before we can jet set off to distant solar systems. Explains White, “We’re trying to see if we can generate a very tiny instance of this in a tabletop experiment, to try to perturb space-time by one part in 10 million.”

With likely NASA budget cuts projected to keep us off Mars for the foreseeable future, it’s good to know that there are still scientists out there making headway into getting us out in the stars. Still, it’s pretty sad that interstellar space travel probably won’t be a reality in time for all us geeks to take advantage of it. Can someone make some progress with time travel, please?