NASA Lands Curiosity Rover on Mars, We Get Ready To Vacation | The Mary Sue

“Nothing like this has ever happened before,” said James Holdren, President Barack Obama’s space advisor. “It’s an enormous step forward in planetary exploration.” After sailing through space for more than eight months, the Mars Science Lab–also known as Curiosity–touched down on Mars last night, landing inside a really ancient space crater.

Covering 352 million miles in its trip to the Red Planet, Curiosity began its two-year, pioneering exploratory mission to seek out information on whether Mars ever supported life. The largest, most advanced spacecraft ever sent into space, Curiosity stuck quite the impressive landing, involving a parachute, a rocket-pack and a tether. Here’s the first leaked shot of what that looked like courtesy of io9.com: 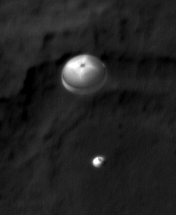 Yes, that’s another craft taking a picture of the rover with HiRISE, a really, really expensive camera.

The operation allowed for essentially zero margin for error, but it went beautifully. Between this and the Olympics, it’s a pretty good time for marveling at the wonders of humanity. As The LA Times puts it:

Curiosity is expected to revolutionize deep-space science, not only searching for indications that Mars is or was habitable, but paving the way for the next critical steps in exploration — soil-sample returns, sending astronauts to Mars, even, perhaps, colonization.

President Obama also released a statement on the event:

“Tonight, on the planet Mars, the United States of America made history. The successful landing of Curiosity – the most sophisticated roving laboratory ever to land on another planet – marks an unprecedented feat of technology that will stand as a point of national pride far into the future. It proves that even the longest of odds are no match for our unique blend of ingenuity and determination.”

The rover (or rather, the people in charge of its social media presence) livetweeted the whole excursion with some very entertaining statements:

There were also some really cute exchanges between Mars Curiosity and astrophysicist Neil deGrasse Tyson. The journey to the planet was pretty impressive in and of itself:

Launched on November 26 from Cape Canaveral, Florida, the robotic lab sailed through space for more than eight months, covering 352 million miles (566 million km), before piercing Mars’ thin atmosphere at 13,000 miles per hour — 17 times the speed of sound — and starting its descent. Encased in a protective capsule-like shell, the craft utilized a first-of-its kind automated flight-entry system to sharply reduce its speed. Then the probe rode a huge, supersonic parachute into the lower atmosphere before a jet-powered backpack NASA called a “sky crane” carried Curiosity most of the rest of the way to its destination, lowering it to the ground by nylon tethers.

The livestream of the landing was chock-full of excitement and history-making, one of the highlights being the ability to watch the people at mission control basically leap around out of pure joy.

Inside mission control, engineers who had been chewing the insides of their cheeks and bouncing their legs nervously leapt to their feet, embracing, high-fiving and, in some cases, weeping with joy. “Yes!” one engineer cried, pumping his fist. “We did it again!” another shouted.

Oh, and if you’re wondering what the view from over there looks like: 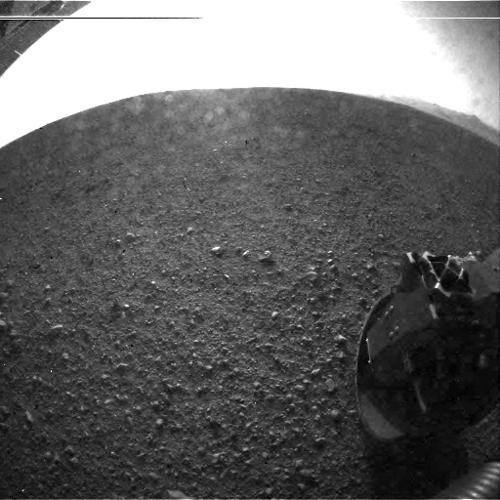 “I can’t believe this, this is unbelievable,” said Allen Chen, who is deputy chief of Curiosity’s descent and landing team. It is pretty unbelievable. But now it’s happened, so we have to believe it.

For now, Mars Curiosity is only sending black and white photos but we’ll soon be seeing the planet in all its red glory.