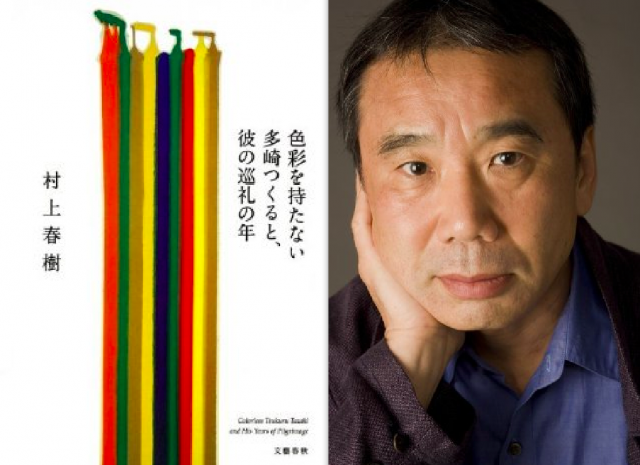 You know what’s the worst? Amazing press about a new book from one of your favorite authors in a language you don’t speak. And then you hear that an English translation is coming out and get really excited.. and realize it’s still a year away. Such is the case with Haruki Murakami’s latest book, Colorless Tsukuru Tazaki and His Years of Pilgrimage.

Murakami is one the best-known Japanese authors worldwide, renowned for his surreal and fantastic plots, his penchant for incorporating elements of science fiction, detective noir, allegory, and romance, and his frequent pop culture references and descriptions of cooking. To say his work is strange and experimental is an understatement — and it’s certainly successful, as reflected in his stupidly good sales and numerous prizes.

Colorless Tsukuru Tazaki and His Years of Pilgrimage has been selling over a million copies per week since it was released in April. It will be translated into English by Philip Gabriel and Jay Rubin, who have worked on many of Murakami’s novels previously, including 1Q84 — which sold out on its first day after a midnight release, and sold another million copies in its first month.

The translators have said that Colorless is a very realistic book, most similar to Norwegian Wood — though they consider it more somber than other novels. It has been described as “the story of a man who looks back on his past and tries to rediscover the meaning of life.” So… that sounds like something that can probably be dealt with in 200 pages or so, right? (I seriously hope it’s a thousand pages again, though.)

More specifically, it’s about Tsukuru Tazaki, a man in his thirties who was abandoned by his friends years earlier. When he falls for a woman, she tells him to face his past — and therein lies the eponymous pilgrimage. The translators have said it ends on a hopeful note, which could be argued for any of the Murakami books that I’ve encountered in the past depending on how you interpret them.

In case you couldn’t tell, this is by far the most exciting thing to happen to me this week, and I don’t think I’m alone in hoping that the translators forego the need for food and sleep until it’s done.