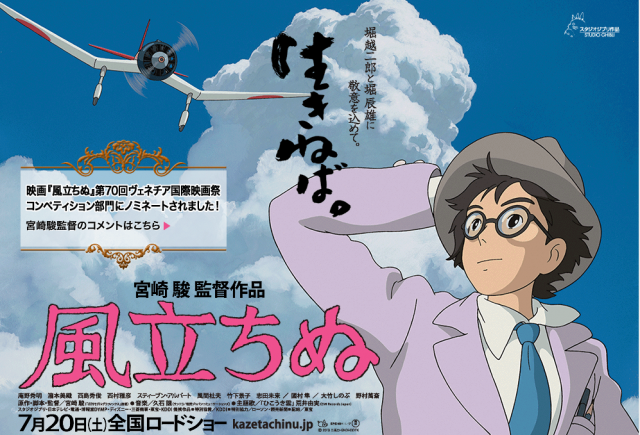 Hayao Miyazaki’s latest film, The Wind Rises, now has an English-subtitled trailer, before its North American premier at the Toronto Film Festival. While many of us know Miyazaki for his fantastical, surreal stories, this appears to be one of the quieter historical dramas he’s also known for: the story of a Japanese aircraft designer before and during WWII.

Jiro Horikoshi, the protagonist, dreams of flying away, and his passion for aircraft is born. He meets the Italian airplane designer Caproni, who he idolizes, and a girl, Nahoko, with whom he falls in love– though the trailer’s assurance that she meets a tragic end, paired with a shot of her coughing up blood, suggests that she is fated to die from that incurable cough of death to which girls in Victorian times so often fall prey.

Though the element of magical realism that was so incredible in Miyazaki’s more familiar body of  work is not present here, The Wind Rises (adapted from the manga, Kaze Tachinu) appears to be a more subtle and ambitious story than was Ponyo, dealing with the creation of the Zero fighter planes that were used to such terrifying and tragic destruction in WWII from the perspective of their creator.

The film does feature the same astounding animation from previous Studio Ghibli works, and reviewer Matthew Penny has said:

Every aerial sequence is either exhilarating or horrifying. The Studio Ghibli background artwork is incredibly evocative of what is more and more discussed as a “lost Japan” of unspoiled green and the bare aesthetic of low wooden cities. With Horikoshi, Miyazaki achieves a range of facial expressions that he has never approached before.

That sounds pretty freaking cool. The lucky people at the Toronto Film Festival this September will be able to determine for themselves if Miyazaki effectively captures the sense of dreams corrupted the horrors of war, the sometimes tragedy of modernization, and the philosophy behind dreams of flight.

Watch the trailer for yourself below: