Besides, it's not like she's wrong about needing to improve the education system. So there's that. 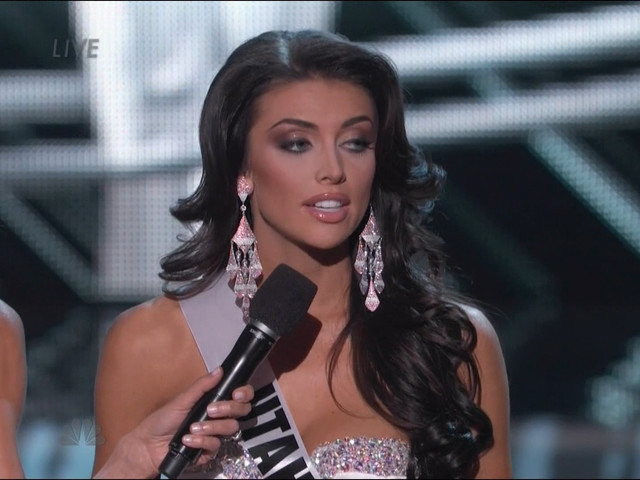 I caught just enough of the Miss USA pageant this weekend to be weirded out by Nick Jonas and Mo Rocca existing in the same space, but not enough to see the unfortunate answer that Miss Utah contestant Marissa Powell gave to NeNe Leake’s question about gender and income equality. The Internet has been tearing into Ms. Powell since, but I firmly believe that we should cut her a little slack. Yes, her response was cringeworthy, confusing, and nonsensical, but a lot of that can be chalked up to an intense case of stage fright. After all, how are you supposed to keep cool in front of millions of people and a Jonas Brother?

In case you haven’t seen the video, here it is. Warning: it’s really uncomfortable. Worth seeing, though, to get a feel for just how out of her element she is:

If you can’t take secondhand embarrassment for more than a few seconds, however, we’ve also got a transcript for you:

NeNe: “A recent report shows that in 40% of American families with children, women are the primary earners, yet they continue to earn less than men. What does this say about society?”

Marissa: “I think we can rate-…relate this back to education and how we are continuing to try to strive t-to…[pauses so long that her fans start shouting their support, which would definitely throw me off, that’s for sure] figure out how to create jobs right now. That is the biggest problem and I think especially the men are… seen as the leaders of this and so we need to try to figure out how to create education better so that we can solve this problem. Thank you.”

What’s really telling is those intense pauses she takes between each part of her answer. She honestly seems pretty aware that what she’s saying makes no sense — just look at the way her eyebrows lift upward as she starts to realize that she’s going nowhere. There’s no way she walked away from that thinking she gave a good answer. If anything, she was probably just relieved that she was able to finish a complete sentence and didn’t utterly shut down after that terrifying pause.

According to research by Erno Hermans of New York University, this type of shutdown is a fairly common a response to moments of high stress — like, for instance, being on stage at a nationally televised beauty pageant. In these situations, the brain shuts off the areas involved in creativity and abstract thinking as a perceived response to a physical threat, regardless of whether or not the threat you feel like you’re facing is physical in nature. An article in Time about a 2011 study by Hermans had this to say:

In the brain, the most active regions [are] part of the “fight or flight” network, including areas that monitor the body’s internal state, regions involved with fear and other emotions, and those involved with orienting attention. The more cortisol released, the greater the strength of the signaling seen in this network. Meanwhile, the parts of the prefrontal cortex involved in thought and reasoning began to shut down.

[…] basically, under stress, the brain automatically shifts its focus away from current activity — for example, doing homework or debating — and toward readiness for fight or flight. That’s why high stress can “make your mind go blank” at the worst possible moments. A faster but more primitive neural network takes over.

So essentially, when Powell found herself trapped in a hellscape of Donald Trump’s design, suspended above the ground in four-inch heels and a mostly see-through dress while being interrogated by a Real Housewife of Atlanta, she wasn’t really thinking about gender equality. Instead, she was probably trying as hard as she could not to leap off the stage and knock over a Jonas Brother in a mad dash for safety — a task, it’s worth noting, in which she succeeded admirably. So maybe we can lay off her now?

At the very least, we hope Marissa can take some solace in the fact that, this being the world we live in now, someone else will embarrass themselves for the whole world to see in fairly short order, leaving her flummoxed answer a quickly forgotten YouTube footnote. We should all be so lucky.

(via Boing Boing and Times, Image via Holland Sentinel)