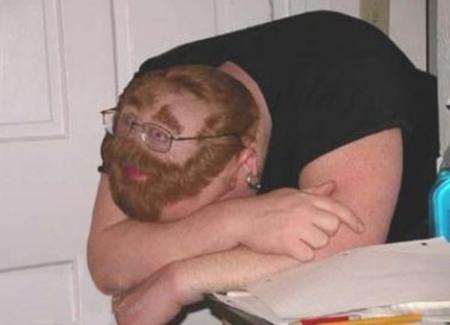 Dr. Sam Schwarzkopf and his colleagues at University College London created an experiment based on the Ebbinghaus illusion, where two identical circles are placed next to each other, though one is surrounded by larger circles and the other identical circle is surrounded by smaller ones, and asked 30 volunteers to guess which of two circles was larger. Afterward, the researchers scanned the volunteers’ brains, and noticed that people with a smaller visual cortex experienced the Ebbinghaus illusion more. Interestingly, the team found that the people with a smaller visual cortex tended to have bigger brains.

NewScientist summarizes the reason behind the experiment’s findings:

Schwarzkopf suggests that this is because the circuits in the visual cortex responsible for the illusion are the same size in everyone, but cover a greater proportion of a smaller visual cortex, causing a stronger effect.

In summary, bigger brains are more easily visually tricked. Maybe that’s why I’ve never been able to experience the joy of seeing through one of those Magic Eye images.