Basically the businessman equivalent of your grandma asking you to stop cursing on your Facebook wall. 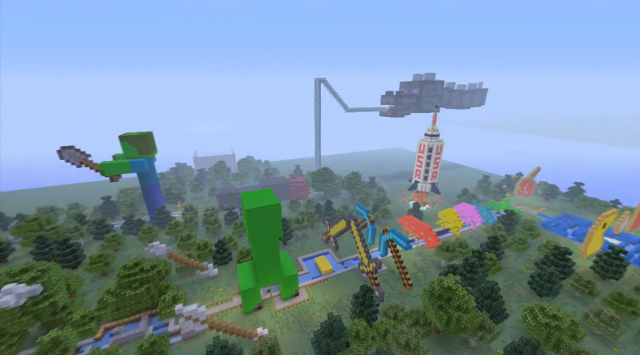 So here’s a fun fact: Apparently the term “Putt-Putt” isn’t just a dorky synonym for mini golf but an actual brand! Sort of like “Band-Aid” and “Kleenex” get used interchangeably with bandage and tissue in common vernacular. Who knew? Apparently a lot of the people who play Minecraft didn’t, as mini golf maps have gotten pretty popular in the past year, and a lot of them are referred to as Putt-Putt games. Rather than bask in their ubiquitousness as a household name, though, the Putt-Putt company decided to hit the developers behind Minecraft with a cease and desist order. Somebody needs to have a talk with them about what the Internet is and how it works, I think.

Markus Persson took to Twitter this morning to show everyone the letter, which he referred to as “Putt Putt being silly.” The whole thing is available for viewing on Imgur, but here’s a choice excerpt:

We feel that Mojang AB’s use of the Putt-Putt® name has benefited Mojang AB to the detriment of Putt-Putt. Due to the identical nature of the marks at issue, it appears that confusion as to the source and/or sponsorship is unavoidable. Accordingly, we require your prompt written assurance that Mojang AB, and each and every person, agent, and entity affiliated with Mojang AB, will immediately refrain from all use of the Putt-Putt® trademark in connection with your business.

Just as a thought experiment, I’d like to see someone explain to me the possible logical steps one would take to determine that creating a mini golf computer game makes people not want to play actual in-person mini golf. I suspect that as with most sports games, most of the people playing mini golf in Minecraft are either A) unlikely to ever play real mini golf in real life because that would involve going outside, or B) already spend more money on mini golf than is probably healthy and are using Minecraft to further their obsession.

If you google “Putt Putt Craft,” by the way, you get a string of video walkthroughs (like the awesome one below) of the different maps out there, and absolutely nothing officially licensed by Mojang. Because, you know, that’s how Minecraft works. People go on it and they make things, and then they call those things whatever they want, and everyone knows that there’s nothing to be done about it. Everybody but Putt-Putt, at least.