Forget pre-orders, forget voting on CUUSOO, forget dreaming: Today, your dream becomes a reality. Friends, the Minecraft LEGO set is available in the LEGO store. Now you can relive the daredevil escapades of Steve, the lone builder, and his Creeper buddy in real life. This is a good day.

As you no doubt recall, the LEGO Minecraft set began its life as a CUUSOO project. Like Kickstarter, CUUSOO gives LEGO builders the chance to submit their own designs to become official LEGO sets. After receiving 10,000 votes, the sets are vetted and if they pass that final hurdle they eventually become purchasable sets. The Minecraft set was one of the first CUUSOO projects to get a lot of attention outside the LEGO community.

The Minecraft set is modular by design, allowing you to reconnect and reconfigure it as you like. Each section has an underground cave area and a removable lid covered with the blocky trees and grass of the Minecraft world. Interestingly, the lids are secured with a smooth, two-stud plate for easy removal. It even comes with unique Steve and Creeper microfigs.

An early review of the set from The Brothers Brick confirmed that, as you might expect, this is a set mostly geared toward Minecraft fans and not so much LEGO builders. It’s a handsome display piece, but low on unique parts and other elements desired by hobbyists. The reviewer did note, however, that LEGO included a lot of spare bits and pieces in the set, which I believe is meant to encourage people to reconfigure the landscape — just like in Minecraft.

Sets are on sale for a quite reasonable $34.99, with a portion of the proceeds going to charity. The perfect addition to any desk or mantle, nothing says “I like to build things” quite like this. 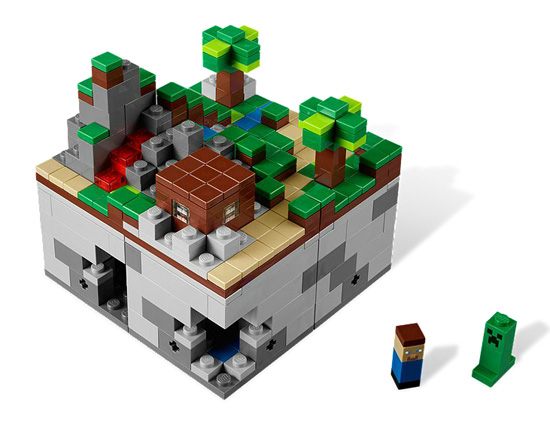