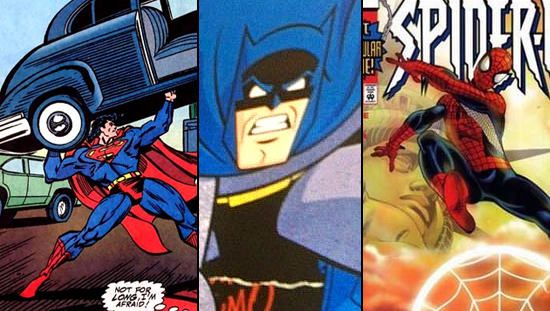 There are a lot of different ways to conduct a religious sermon. Sometimes a preacher can even make it fun, exciting, and easy to relate to, but few people would expect a Catholic priest to be one of them. Which is why a lot of people have homed in on Father Alvarez in Mexico, who uses the icons of Superman, Batman, and Spider-Man in his weekly mass for children.

A bright plastic water gun, filled with holy water, is first unleashed upon the congregation, blessing them and presumably super-soaking them at the same time.

The church is Ojo de Agua in Saltillo, Mexico, and the man is Father Humberto Alvarez. Each week, before he begins conventional services, he dons a white chasuble with Supe, Spidey, and the Dark Knight emblazoned upon it. Why? Because these pop culture icons, like Jesus, are paragons — in some ways even pariahs — in the society in which they live and struggle. They still represent the good that people can do, and they’re role models kids are already familiar with. More specifically, Alvarez chose these three because  of their “struggle and effort to overcome fear and find peace and forgiveness,” an example he wishes to relay to his young parishioners.

More than children are attending Father Alvarez’s sensational services. Kids and adults both have flocked to Ojo de Agua, and it’s drawn its share of traditional-minded critics, as unconventional methods always do. Evidently, the Bishop of Saltillo himself disapproves.

There are a lot of ways to teach religion or any moral story. The Bible has Jesus telling parables. C.S. Lewis wrote fiction like The Chronicles of Narnia to entertain children as well as offer Christian allegory. He also wrote the Space Trilogy (for adults!), in which a linguist is kidnapped and rocketed to Mars only to discover that Earth, unlike the others in the Solar System, is considered “the silent planet” by its alien inhabitants. Again, unconventional ways of preaching.

So Father Alvarez has a squirt gun and sports superhero-bedecked vestments. Well, why not? I’d only want to point out that Batman, Spider-Man, and Superman all have alter egos, unlike the Jesus of Christian religion. Even so, it’s not like the Catholic Church doesn’t already have plenty of icons hanging around. Why not three more?