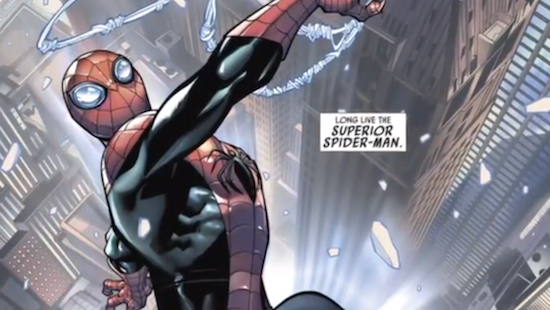 Whether you gracefully accepted it as the next bold step in the hero’s storied legacy or drove yourself to giving up on reading anything from Marvel Comics forever — which really translates to about two weeks, let’s not kid ourselves — there’s no denying that the upcoming transition of the role of the friendly neighborhood Spider-Man is a historic milestone for the web-slinger, with the new Spider-Man’s madcap adventures in altruism starting tomorrow in Superior Spider-Man #1. As is the case with the renumbering of any comic series featuring a popular character, people who don’t typically pick up funny books will fight inhibition and see what all the geeky hubbub is about, even if they’re not up on the years of complex continuity. In an effort to save these valiant few the time spent reading back issues and collected editions, the fine folks at ComicVine have together a nifty video highlighting the important moments of Spider-Man and a certain villain’s 50-year conflict that led to the controversial change in direction.

Before watching this video, we never realized just how many times Dr. Octopus had the living snot beaten out of him by the various heroes and villains of the Marvel Universe. On that note, we also never realized just how many costumed vigilantes and crooks viewed a tubby, near-sighted scientist with mechanical arms as an ideal punching bag in which to vent their pent-up frustrations. No wonder Doc Ock has had a chip or two on his shoulders this past half century.