Superman is a Blogger Now, Time of Death for Print Media Now Official 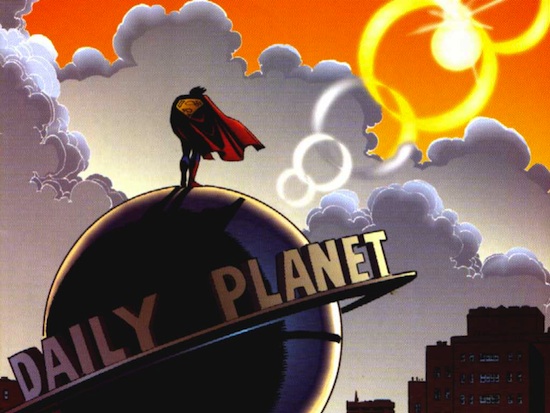 Good news and bad news, everyone. The bad news? Marvel and DC are continuing their frankly troubling and stupid streak of revealing what’s happening in next week’s comics before those books actually hit the stands. The good news? The latest spoiler is for something you couldn’t give a damn about with a gun to your head anyway. So, everyone ready? Clark Kent is quitting his job as a reporter for the Daily Planet, because he has too much journalistic integrity to work there any more. However, everybody has to make a living, even superheroes, and so, Superman will be running his own blog.

Now that all of our ears have recovered from the sonic boom produced by millions of people issuing a simultaneous “meh,” we can move on to address the less-than-Earth-shattering ramifications of this twist. Will the world now be imperiled as the last son of Krypton slaves over SEO and tries to figure out why his CMS is doing wonky things to the captions on all of his slideshows instead of fighting giant robots? Probably not. Because trust me, no one wants to read a comic book about a day in the life of a blogger. (SPOLIER ALERT: It’s really standard, you guys!)

This whole thing reeks of the sort of desperation and disconnect that are the reasons that we don’t read superhero comics anymore. It might have had some impact if DC didn’t reboot its universe so often that Clark Kent’s long term relationship with the storied paper went back all of like, eleven minutes in new continuity. Oh wait, it wouldn’t. The whole thing would at least be less sad if DC didn’t seem to think it was so edgy, daring, and in-the-now by forcing themselves to be relevant on a matter that’s been settled for years. Print media is dying? Really? What do you think of this whole Bush-Kerry election, DC editorial team?

The rest of you, do me a favor? No one tell these guys about the housing crisis. I want to see the looks on their faces when they figure it out in 2015. I’m sure the Chilean immigrant single mother who is Green Lantern by then will have some really poignant ways to address it.