Mew-Genics May be Team Meat’s Strangest Game Yet 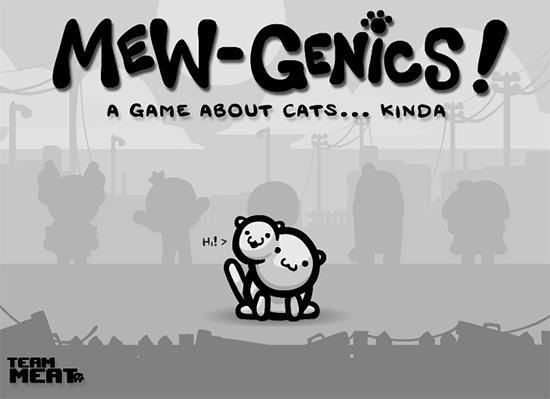 Indie game development duo Team Meat has become a poster-child for indie game development since Super Meat Boy started making us pull our hair out in 2010. Though they haven’t exactly stayed quiet – developer Edmund McMillen created The Binding of Isaac with a separate team, and the two-man team has denounced Microsoft for their failure to support Super Meat Boy‘s XBLA launch – there hasn’t been much talk about plans for a new game either… That is, until the duo announced that they’ve been working on something completely new on the Team Meat blog. According to McMillen, Mew-Genics is the “strangest” game that either he or programmer Tommy Refenes has ever worked on.

According to their blog post, McMillen and Refenes created the seeds for Mew-Genics during a weekend game-jam they were doing to take a break from making the new iOS version of Super Meat Boy. According to McMillen, after making the two-day version, the duo couldn’t stop themselves from sidelining SMB iOS to work on Mew-Genics. Unfortunately for iOS-owning SMB fans, it sounds like that project will be delayed for however long it takes for Team Meat to make this game.

Like most video game reveals, Team Meat was excited to let everyone know that the game exists, but didn’t give fans much to go on. According to McMillen, Mew-Genics “will be randomly generated, strange and involve cats.” That’s not a lot to go on, but when you combine that with the fact that McMillen, the mind behind SMB and the The Binding of Isaac, calls it very strange, it’s fair to say that the game will be a sight to see, regardless of how it plays.

Team Meat has only been working on Mew-Genics for about a month, so don’t expect to get your hands on the game any time soon. That said, they said fans should expect to hear get more info about the game, including screenshots, soon.