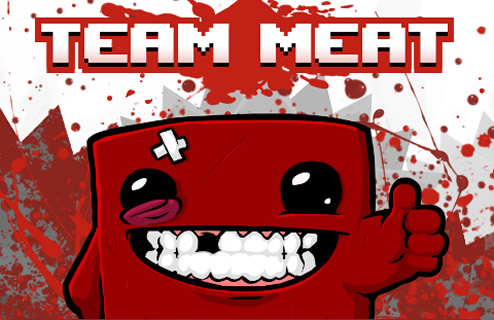 Team Meat, known primarily for their punishingly difficult platformer with super tight controls, doesn’t seem like it would have too much concern with the mobile gaming space. Turns out they do, and they aren’t fans. The pair are actually planning a mobile Super Meat Boy, one specifically redesigned to fit the platform, but are also generally fed up with the mobile approach to game development on principle. “There is a whole sh*t load of wrong [with mobile game development] these days, from abusive and manipulative money making tactics, to flat out stealing.”  And it gets even more real.

The rant — or righteous manifesto depending on how you look at it — was posted on the Team Meat blog by outspoken but terrific developer Edmund McMillen. Here’s the meat of the argument from the post. NSFW language below. I think it’s best left that way for emphasis:

There is an on going theme these days to use a very basic video game shell and hang a “power up carrot” in front of the player. the player sees this carrot, and wants it! all the player needs to do is a few very rudimentary repetitious actions to attain it, once they get to it, another drops down and asks them to do more… but then the catch… instead of achieving these “goals” by running on the tread mill, you can instead just pay a single dollar and you instantly get to your goal! better yet pay 10 and unlock all your goals without even having to ever play the game!

words can not express how fucking wrong and horrible this is, for games, for gamers and for the platform as a whole… this business tactic is a slap in the face to actual game design and embodies everything that is wrong with the mobile/casual video game scene.

Nonetheless, McMillen’s ire is understandable from anyone, but particularly understandable if you’ve every played Super Meat Boy; nobody wins without the exertion of sufficient effort. It’s unlikely that simply talking about this issue is going to change anything, but I think McMillen speaks for an increasingly large segment of developers and gamers alike. Can Super Meat Boy Mobile fix the mobile gaming world? Probably not, but you can be damn sure it won’t be pay-to-win.