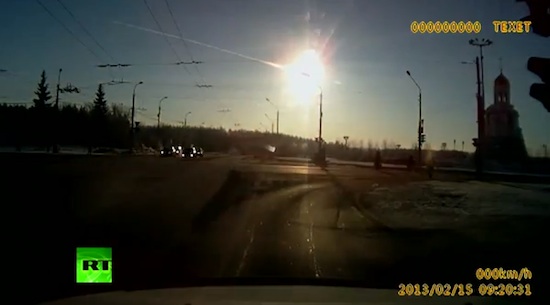 So, Russia sure had an exciting morning, as a meteor zipping towards Earth shattered in the air over the nation’s Chelyabinsk region, injuring hundreds of people and shattering windows, blowing the doors off of buildings and collapsing roofs. Thanks to the magic of omnipresent phone and dashboard cameras, lots of folks captured the meteor’s flight — and it’s explosion an estimated 18 and 32 miles above the Earth’s surface, which devastated the area — and you can watch some of the amazing videos below.

That’s what it looked like from dashboard cameras — the end of the damn world. Now, let’s see how scary it was if you were inside.

We don’t know exactly where most of this video is coming from at the moment, and some of it looks almost too incredible to be real, but reports from Russian officials indicate that more than 500 people have been injured by the blast, though thankfully only 22 are reported to be badly hurt enough to require hospitalization.

Right now it’s unclear if the passage of asteroid DA14 close to Earth today is connected to this meteor, but we’ll be bringing you updates on this story as it develops today, so check back often.