Will an Asteroid Hit My House? Calculate Your Odds | The Mary Sue

What Are the Odds an Asteroid Will Hit Your House? 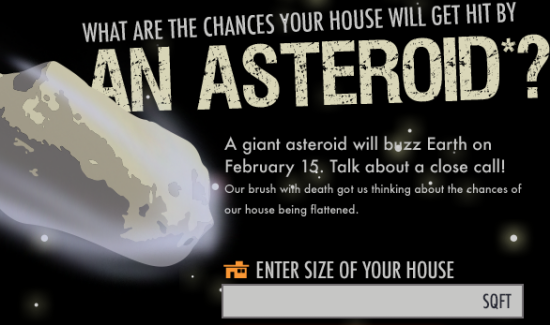 Tomorrow the 143,000 ton asteroid 2012 DA14 will pass a mere 17,200 miles from the Earth. What does that mean for you? Nothing. There’s no chance of DA14 hitting the Earth. We’ll all be fine this time around, but hundreds of smaller objects strike the Earth every year. Our friends at Movoto have a handy calculator to get the odds that one will hit your house. Give it a try, and you’ll probably feel a lot better about the whole thing.

According to Movoto’s Wikipedia research, an average of one small asteroid per year hits the Earth, but around 500 meteorites make impact with our planet. So what are your chances of ending up with a rock from space falling on your home? To start, why not pop your home’s square footage into the calculator below:

My chances were around 1 in 4,000,000,000,000 of an asteroid or meteorite hitting my house, so I’m feeling pretty comfortable about my chances of not having to fix any holes in my roof in the near future. How’d Movoto get their numbers? They simply made a comparison to the square footage of my home with the total surface area of the Earth.

The surface of the Earth is approximately 583,052,870 square miles, but because Movoto is a real-estate company, they like to think of things in square feet. To them, the surface of the Earth is 5,490,000,000,000,000 square feet. That’s a lot of real estate, and my small suburban home barely makes a mark on the surface, so the chance that something hitting the Earth’s nearly five and a half quadrillion square feet will happen to fall on my 1,400 are pretty infinitesimal.

So check out the Movoto calculator to get your own number. That way when one of your less educated friends asks if you’re worried about an asteroid hitting your house you can spit a really big number back in their face. The less educated hate big numbers.