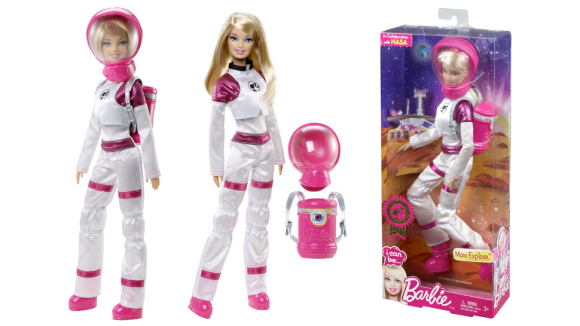 Has NASA decided to celebrate the anniversary of the Mars Curiosity Rover landing by creating a Mars Explorer Barbie? Indeed, it has, and we’re happy to see another toy promoting women in science. Plus, Barbie probably has a better time balancing in Martian gravity, what with her unusual proportions. This adventuresome Barbie also comes with a little cardboard Curiosity Rover, with touches of pink and purple added to it, but it might be better paired with the Hot Wheels Curiosity Rover. Mars Explorer Barbie is the “Career of the Year” Barbie for 2013, and it’s certainly a plus to see a science oriented Barbie take center stage. The more science related and geeky fields Mattel puts Barbie in, the better, even if it’s a bit troubling that she doesn’t have gloves on her space suit. On the other hand, I think Mattel may be onto something with such a brightly colored rover.