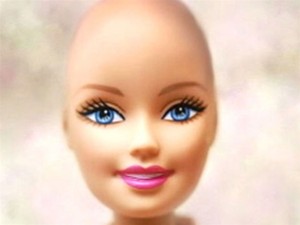 This picture is just a mock-up made in Photoshop, but after a campaign on Facebook started calling for a bald Barbie doll, Mattel has listened and responded — by promising to make a bald “friend” of Barbie! The new doll will be distributed to children who are in the hospital undergoing treatment for a variety of diseases, some of which may cause hair loss. So many little girls look to Barbie as the epitome of beauty; now the ones who have lost their hair will feel a lot less alone in their fights!

Mattel made the announcement on their own Facebook page, saying the following:

Play is vital for children, especially during difficult times. We are pleased to share with our community that next year we will be producing a fashion doll, that will be a friend of Barbie, which will include wigs, hats, scarves and other fashion accessories to provide girls with a traditional fashion play experience. For those girls who choose, the wigs and head coverings can be interchanged or completely removed. We will work with our longstanding partner, the Children’s Hospital Association, to donate and distribute the dolls exclusively to children’s hospitals directly reaching girls who are most affected by hair loss.

Proceeds from the new friend will go toward CureSearch for Children’s Cancer and the National Alopecia Areata Foundation. For now, the dolls will only be distributed in children’s hospitals, but other advocates would like to see them more widely available in retail stores. That way, even healthy children can see that baldness is nothing that should be considered unusual in their everyday lives, and there’s no need to treat someone who’s lost their hair any differently. But is there a chance that this initial, limited run could result in Mattel changing their mind? That’s always a possibility.

The Facebook campaign for the doll, called “Bald and Beautiful Barbie,” currently has over 152,000 fans on it, and there could very well be a companion coming for boys — another campaign is calling for a bald G.I. Joe from Hasbro, and that has just under 6,000 fans.

There is always the argument that Barbie is a bad role model — she’s an unrealistic ideal of unattainable beauty, etc. But the fact is, she’s pretty popular. (You should see her Wikipedia page.) For the girls who do love Barbie, but are feeling less than beautiful while fighting an illness, this doll will mean the world to them. Nothing wrong with putting a smile on a little gir’s face!