Hey, They Made Another Brainy Barbie: Architect Barbie 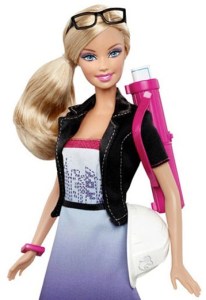 I’ve said it before, and I’ll say it again: I am in favor of whatever geeky/computery/mathy Barbies that Mattel wants to roll out, no matter how pink or ridiculous.  And it’s certainly not because I have any nostalgia for Barbie herself.  So, why?

Because somewhere out there is a little girl who wants to be a computer engineer or an architect, and she’s got some well meaning but distant relative who’s just trying to get her a toy that she’d like, based primarily on the fact that she’s a girl and girls like dolls, right?  And when that relative hands over a Barbie I Can Be Architect doll, instead of feeling like she’s weird for not liking what “normal” girls are expected to like, that little girl is going to feel just a little bit more accepted by society.

And no, I don’t accept the argument that the accessories are all wrong.  Architect Barbie comes with a hard hat, a tiny model of her proposed dream house, a pink blueprint case, glasses, and high heeled boots.  Okay, so heels aren’t that great for construction sites.  Look at what Doctor Barbie comes with: 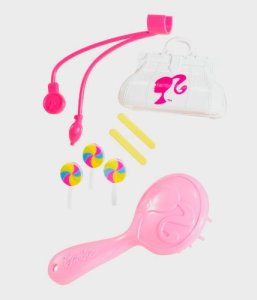 But if somebody were to make 80’s business woman Barbie, I might actually buy that.