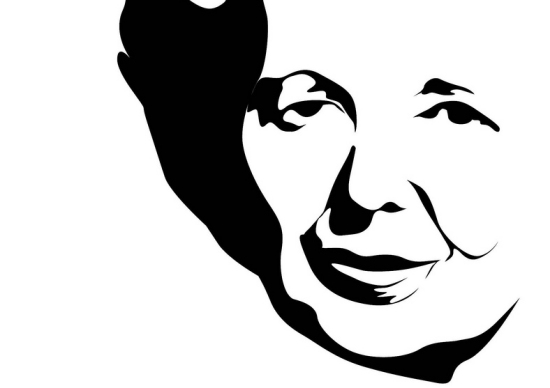 Former Prime Minister Margaret Thatcher has died at the age of 87 due to complications from a stroke. Her name quickly shot up to one of the top trending topics on Twitter, because Twitter loves talking about a notable death. Thatcher was nothing if not a controversial figure in Britain, and while many supporters are mourning her passing, plenty of folks are on the verge of celebration, while others are just using her passing to crack jokes. Here’s a brief sampling of Twitter’s reaction to the former PM’s passing.

First up is CNN host and professional British person, Piers Morgan, with arguably the most neutral memorial tweet for the late Iron Lady. He decided to memorialise her with a list of adjectives: 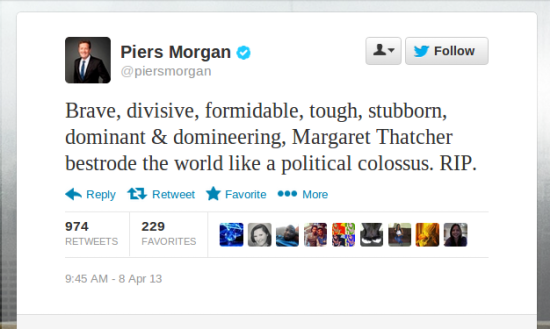 Similarly conservative politicians are remembering Thatcher fondly for the work she did in her 11 years as Prime Minister. US Speaker of the House, John Boehner, who was probably crying while writing this tweet, had this to say: 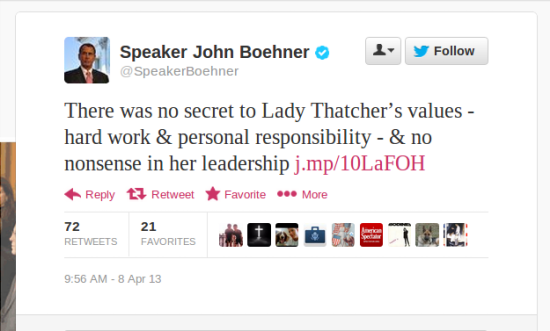 The link is to a press release on the Speaker’s site where he further expounds on Thatcher’s virtues, calling her the “greatest peacetime Prime Minister in British history.” I imagine that statement is debatable.

Not everyone has been as respectful as Boehner or Morgan, though. British Parliament Member for the Respect Party, George Galloway took a somewhat more crass approach to the news, and gained lot of negative reactions in the process: 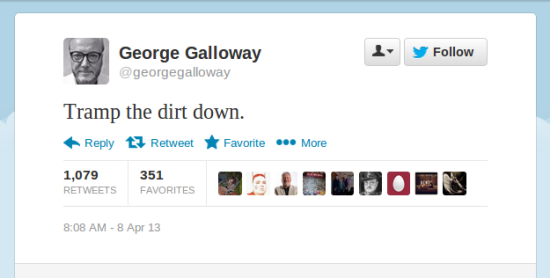 Perhaps he’s worried about a post-zombie-apocalypse Thatcher coming to power again? Or just channelling his inner Elvis Costello? Probably both.

Some comedians weighed in with jokes — a long-standing method of dealing with tragic news. San Francisco-based comedian Cole Stratton wonders how best Thatcher might be memorialized in the future: 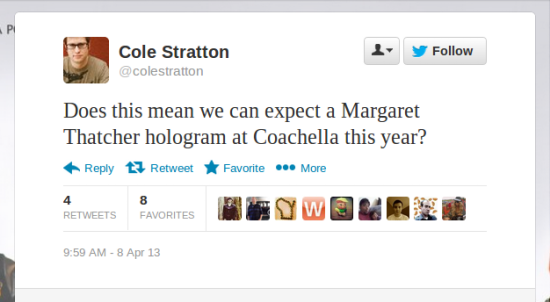 I’m not sure that anyone has ever implied that Thatcher was the “Tupac of British Politics” before, but maybe it will catch on?

Saturday Night Live writer Josh Patten decided to use Thatcher’s passing to teach us all an important lesson about abbreviating names: 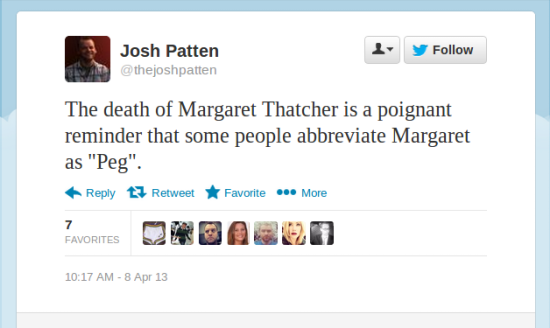 Our friends over at The Braiser chose to remember Thatcher in probably the best way possibly, by reminding everyone that she helped invent soft serve ice cream: 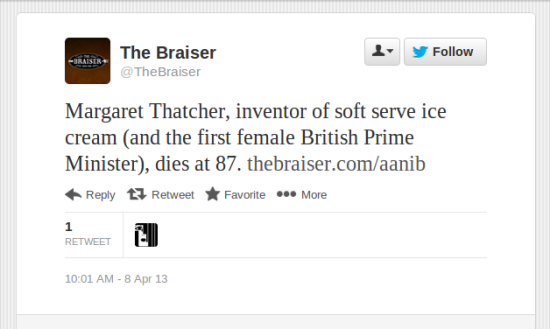 So there you have it. This is but a small sample of the huge number of tweets going out about the former Prime Minister’s passing. There are countless others that we’d never have time to read since making comments on Twitter seems to be the way we’ve all agreed to grieve in these modern times.

(via Twitter and BBC News, image via Rachel E Chapman)