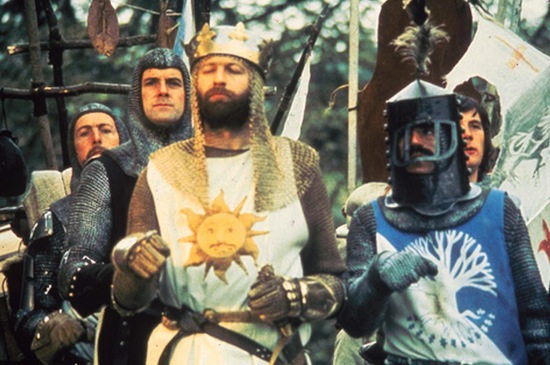 The United Kingdom has updated it’s citizenship test to better reflect a knowledge of the nation’s history and culture, rather than practical skills in everyday life. Questions about whether you can use the Internet or know where you’re water meter is, for example, have been replaced with trivia about everything from Margaret Thatcher and Stonehenge — the U.K.’s two most famous rock formations —  to the work of British entertainers like The Beatles and Monty Python. We’re really hoping that you can skip the whole exam in favor of doing a solo show of the entire Knights Who Say Ne bit, in which case we are soooooo in.

The comedy troupe won’t be the only thing that aspiring Brits are tested on, because the world is simply not that wonderful, but is a clear indicator that the government sees buying into the United Kingdom’s cultural history as a pretty important part of becoming a newly-minted citizen, though there’s no word yet on whether wannabe U.K. citizens will be required to differentiate between a dead parrot and a live one. We’re also eager to hear what other bits of British nerd-arcana may now come in handy, as we really just wouldn’t want to live in any country that doesn’t require you to know what TARDIS is an acronym for before entering.

We only have two questions in response to this news. First off: Seriously, United Kingdom, how were there NOT questions about Monty Python and The Rolling Stones on your citizenship test already? Secondly: Can we please come and live in you now? We may not know much — OK, fine, we definitely don’t know much — but we know our Python trivia.

Unfortunately, questions about Terry Gilliam, Eric Idle, John Cleese and the rest of the gang didn’t make the cut for the practice exam you can take right here. On the other hand, maybe that’s a good thing — it leaves me a little less embarrassed by my pitiful 6 out of 10 score. It looks like I’ll just be crashing on England’s couch for right now.