Flying Rescue Robot Could Be the Lifeguard of the Future 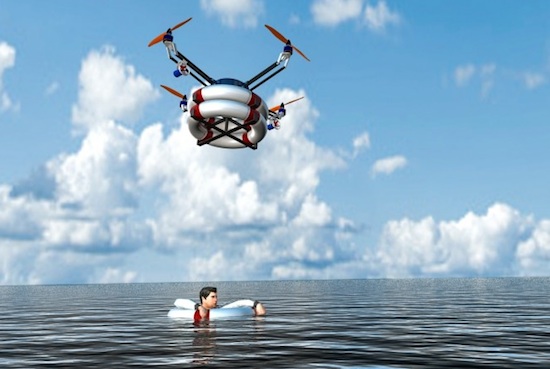 A research lab in Iran is hard at work building a new robotic lifeguard that could respond instantly to passengers and crew who fall from ships by flying to their rescue and dropping a life preserver to them from the sky. It’s a noble cause and a novel use for a robot, not to mention extremely forward thinking. Considering the state of most cruise ships lately, people jumping overboard to take their chances with the sharks rather than hang out for one more day in a feces-smeared cabin with no electricity is going to be a more and more common occurrence. Hell, these could be a whole new attraction: “Get saved from certain death in the open ocean by one of Carnival’s Rescue Robots!”

The robot, known as Pars, is being developed by Tehran-based RTS Labs, and the design is pretty ingenious. The ship-based Pars is a simple quadcopter that can be alerted when someone falls overboard, or is pushed overboard, or is forced to walk the plank. Once it’s launched, Pars scans the area around the boat with a thermal sensor, just like a Predator would. Instead of hunting the person in the water for sport, though, Pars drops a life preserver to keep them afloat until crew members can mount a proper rescue.

Right now, Pars can only hold one life preserver ring, but modifications are underway to let it hold up to three, allowing it to respond to multiple people in danger of drowning after having one too many appletinis and leaning just a little too far over the deck rail. No judgment, happens to the best of us. The designers are also looking into building marine headquarters for Pars robots that aren’t ship-based. These floating platforms would serve as docks for multiple Pars robots that could respond to events like ships capsizing or sinking, where many people are in need of immediate attention and often far from help. The Pars robots could also recharge on their downtime courtesy of solar-powered charging stations on the platforms.