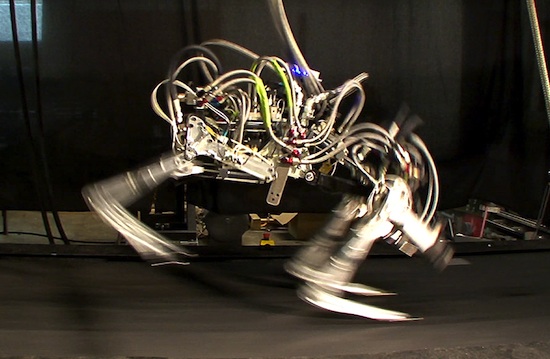 Earlier this year, we brought you the news that the DARPA-funded Cheetah robot, crafted by the robotics masterminds at Boston Dynamics, broke the world’s land speed record for robots with an 18 mph sprint. This week, the big cat inspired automaton shattered that record, travelling at a speed-blur inducing 28.3 mph. That’s not only faster than any robot has ever moved — it’s faster than the human land speed record of 27.9 mph set by Usain Bolt in 2009. That’s right — there is now a robot faster than the world’s fastest human, which means it is certainly capable of chasing down any one of us. You can watch the record setting run below, if you’re inclined to get a sneak preview of the end of the world.

It’s a comfort to keep in mind that Cheetah is still running on off-board power and stabilized by a boom during this run. In all of the increasingly impressive tests of Cheetah that we’ve seen, it has yet to leave the treadmill and take an unassisted jog on real terrain. So as long as you have the good sense to stay away from treadmills where robots made of speed and metal and nightmares live, you should not have any cause for mind-paralyzing terror.

What is cause for mind-paralyzing terror? This isn’t the last version of Cheetah. The robotic cat is just going to get faster in future iterations, and considering the leaps and bounds it’s made in just the last few months, the thing looks to have a lot of spring in its step when it gets released. Boston Dynamics and DARPA both want a bot capable of galloping along at 50 mph, and taking into account that Cheetah’s speed has jumped from 18 to 28 mph in just the last few months, it’s looking likely that they’ll get one, and maybe sooner than anyone thought.

That release could come as soon as next year, when Boston Dynamics is scheduled to introduce WildCat, the first Cheetah version to move off of the treadmill and into the wild. By “the wild,” we of course mean “your home, where it will proceed to destroy everything you ever loved.”