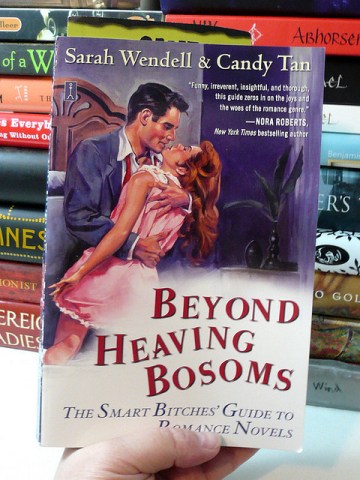 Poor Toronto Public Library. You tried to identify with angsty teens, and now people think you’re a Ray Bradbury villain. What can I say, Valentine’s Day is hard.

Toronto Public Library was the center of a minor controversy recently after their plans for a Valentine’s Day teen event seemed a little too Thought Police-y for some people’s liking.

Blech! Yeesh! Tired of making a fuss over Valentine’s Day? Seek refuge from the mushiness at one of the Anti-Valentine’s Day Anti-Parties.

Join us for a party where hearts, Cupid, the colour red and public displays of affection are banned and black clothing is encouraged. Join us to vandalize romance novel covers, test your knowledge of former celebrity couples and write the worst break-up letter.

Party goers were encouraged to wear black and bring their sarcasm, as well as presumably their hatred for the written word.

Unfortunately for cynical Canadian teens, The Library has changed its plans after receiving a letter from Harlequin author Vicki Essex in which she made the fairly obvious point that, whatever the motivation, encouraging impressionable youths to destroy books is borderline fascist-y.

Says Essex in her open letter to the Library,

Historically, romance novels have faced much criticism and disrespect, much of it due to the fact that the main audience is women and the writers are predominantly women. By adding to the chorus of voices decrying the non-value of romance through this event, the Toronto Public Library fosters an environment in which it is considered acceptable to judge people for the things they like.

Thanks to Essex’s letter (or because, geez, they were just trying to have a stupid party, don’t have a cow) the Library has changed the event’s description, and says destroying public property will be replaced by the teens designing their own ”bad” romance novel cover.

I love that Essex equated the disparagement of romance novels with discrimination against their largely female readership, but even more than that I love that Libraries are still, you know, a thing.

It’s impressive that in an age of Nooks, Kindles and bed bugs, libraries are still relevant to the extent where citizens pen concerned letters to misguided librarians.

It’s enough to engorge my loins and set my heart fluttering.