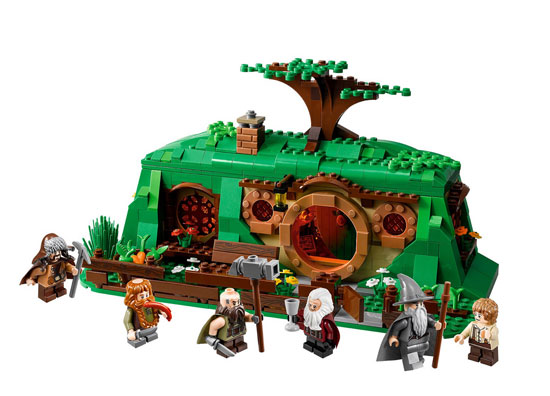 We’d heard rumors that LEGO was going to have som fun announcements at San Diego Comic-Con this year. Our expectations were happily exceeded when this handsome rendering of Bilbo’s Bag End was unveiled yesterday. And yes, it comes with the dwarves.

Details of the set are still scarce, but it is being widely reported to come with all the minifigs you see here. For those of us not up on their Tolkien, that’s Gandalf, Bilbo, Dwalin, Bombur, Bofur, and Balin.

Of course, the real highlight is Bag End itself, which is stunningly designed. There even appear to be some furniture and what not within, suggesting that the model has an open back. What really got my attention were the windows, some of which appear to be made out of cleverly repurposed swivel plates. And then there’s that hammer — golly!

Assuredly tied in with the release of The Hobbit later this year, the set sets a high mark for new LotR LEGO sets. I can’t wait to see what they do with Smaug.