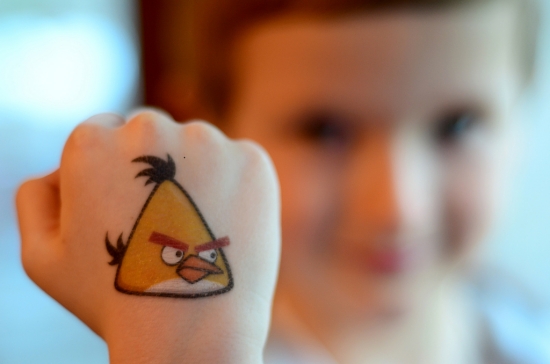 Any day now, I will become a parent. To prepare, I’ve been looking at a lot of apps that claim to be educational and fun for children, but what I already know from being an uncle is that kids don’t care about those educational apps. They just want to play Angry Birds. The good news — depending on your definition of that, I guess — is that my experiences with my nephews has just been borne out by science. A new study shows that kids log more time play Rovio’s Angry Birds games than any educational games, but I don’t think that’s a bad thing. Angry Birds is a great primer for learning physics.

The study was done by Kytephone, a company that gives parents tools to turn their Android phone into a more kid-friendly device. They studied 13,000 kids between the ages of eight and 14 in more than 70 countries and found that Angry Birds Star Wars was the most popular game, probably because adding lightsabers to things inherently makes them more awesome. It’s joined in the top three by the original Angry Birds and Bad Piggies. The study wasn’t based on downloads, but rather on total time children spent playing each game.

Angry Birds is not an educational game, and when I say it’s a great primer for physics, I don’t mean to say that it teaches kids physics. I have a four-year-old nephew who loves playing Angry Birds, and he’s surprisingly good at it, but it’s not because he has a great understanding of potential energy, gravity, or force of impact. He just knows that if he makes a bird hit a pig hard enough, that pig will probably fall over and disappear.

When he gets older though, and he’s learning about things like potential energy, he could make the connection that the farther back he pulls on the slingshot in Angry Birds, the more potential energy he’s putting behind launching the bird. Being told that an Angry Bird travels along a parabolic trajectory could help him understand what those words mean. Playing Angry Birds Space won’t turn him into an astrophysicist. Could it help to spark his interest in the subject, though? Stranger things have happened

The other lesson to take here is that making a game educational doesn’t really do much if a child doesn’t want to play it. I think kids can learn a lot more from games that are actually fun to play as long as those games have at least a modicum of something educational about them — look at classics of the genre like Math Blasters and Where in the World is Carmen Sandiego?. One thing is for sure, though — nobody’s learning anything from Temple Run, which came in at number eight on Kytephone’s list.

(via TechCrunch, image via lincolnblues)