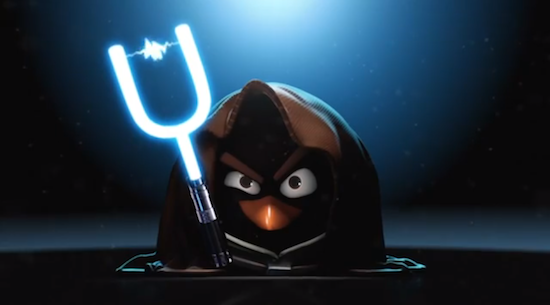 Because either franchise hasn’t been milked enough, starting November 8, Angry Birds Star Wars will be released to the masses. Sure, the above picture is actually amusing, but do we need another Angry Birds so soon after the last few? According to Rovio’s Mighty Eagle, Peter Vesterbacka, this version of Angry Birds is the “best Angry Birds [they’ve] ever done.” You know, until two weeks from now when the next one is announced.

Though the teaser below doesn’t show off any kind of gameplay, Vesterbacka claims the game will feature the gameplay we’re all familiar with, mixed with new “cutting-edge” elements.

In a kind of obnoxious move, retailers will be stocked with merchandise for the new game on October 28, before the game actually releases. Hopefully we’ll have seen some sort of gameplay by then. If we can just force choke all the birds, we’ll be pretty happy and might actually play it, rather than being continually flabbergasted that this avian series has no end.