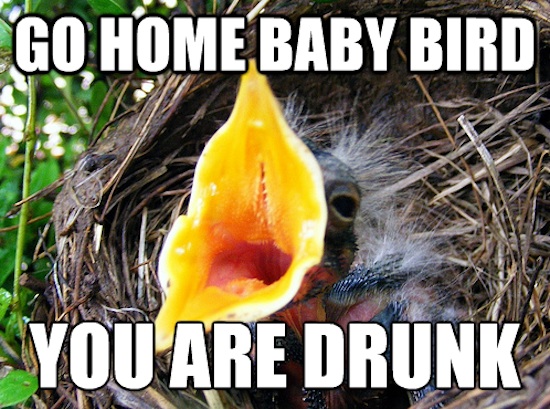 It turns out that, just like human teenagers, young birds can also get tipsy off of alcohol, make some poor decisions, and end up clumsy, stumbling wrecks. That’s the finding of a study of young blackbirds who got dangerously tanked off after eating fermented rowan berries near a primary school in England last year.

Sadly, it took the deaths of a dozen young blackbirds last year to teach us this now significantly less adorable lesson in biology. After finding the birds dead, as well as several others clearly unwell — unsteady on their feet and unable to fly — local researchers checked them out for diseases like avian flu, for which they tested negative. Stumped, scientists turned to nearby trees to find the culprit — simple rowan berries.

Rowan berries aren’t usually toxic to blackbirds, but these berries had fermented. The ethanol filled berries killed some of the young birds with alcohol poisoning and left others sick and confused, which is exactly why college freshman have RAs. Others seemed to be dead due not to alcohol poisoning, but from mid-air collisions, the result of drunkenly taking to the air, as it appears that unlike your no-good Uncle Mike, blackbirds do not fly better when they’ve had a few.

Let this be a reminder to all of us that alcohol is fun, but can also be dangerous, and sometimes kills little birds, which is super sad. Have a safe weekend, everybody.