What have we been DOING with our lives?! 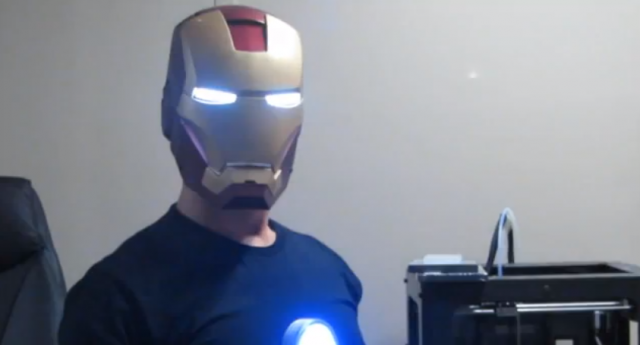 Ryan Brooks must have a lot of time on his hands, because he’s been hard at work making his own authentic Mark III Iron Man suit. Well, not totally authentic — it’s not made of iron, or any kind of metal. It’s all plastic, because he 3D prints them. Oh my god, what? Is this actually Tony Stark or something?

His first video from June demonstrates the mechanism that allows the back to cascade open and allow him to fit his head into the helmet. Most cosplayers and costumers, he explains, make these back pieces detachable. Brooks opted for a more badass route than that.

In this second video from October, he presents a fully painted version of the helmet. It has glowing eyes and an accelerometer/servo mechanism set-up that allows him to flip the face place open by moving the back of his head in a particular way. Did you understand the words you just read? The face plate flips open. Jesus Christ.

Brooks is also wearing a light-up arc reactor on his chest in this video, because he’s a goddamn champion.

Brooks’ YouTube channel also has a number of awesome comics/cosplay-themed videos of the various awesome projects he’s done over the years, including that arc reactor we mentioned earlier, a rough prototype of the Mark V briefcase suit, the “mind control” device from Iron Man 3 (unfortunately it does not actually control an Iron Man suit, but it looks pretty accurate), and even the Cyclops visor from X2 and Hawkeye‘s snap-action bow and rotating quiver from Avengers. Basically, this guy is the coolest and none of us are ever going to be as awesome as he is.

As Richard Darrell over at Bit Rebels points out, with the way that 3d printing technology is progressing, it might not be long before Brook’s helmet designs could be “printed” with some kind of metal. After all, we can make durable metal guns using a type of 3D printer, so why not a badass helmet befitting of a genius billionaire playboy philanthropist?

(via Bit Rebels, images/videos video via Ryan Brooks on Youtube)