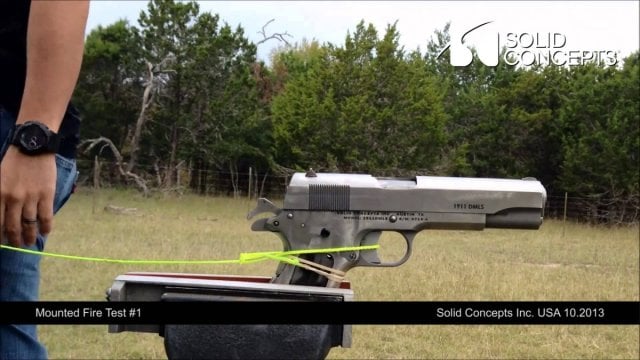 We’ve already covered the first 3D-printed handgun, and the first 3D-printed rifle. Both were made of plastic, and could only manage one shot before breaking. But the new 1911 series pistol by Solid Concepts is 3D printed from steel, and seems to have no problems firing repeatedly and accurately.

Solid Concepts says their 3D-printed pistol isn’t about making a cheaper or simpler gun. They just want to prove that 3D-printed parts can be just as strong, reliable, and accurate as their traditional counterparts. Vice President of Additive Manufacturing Kent Firestone said:

The whole concept of using a laser sintering process to 3D Print a metal gun revolves around proving the reliability, accuracy and usability of metal 3D Printing as functional prototypes and end use products. It’s a common misconception that 3D Printing isn’t accurate or strong enough, and we’re working to change people’s perspective.

The idea of someone being able to download plans from the Internet and print their own gun may seem unsettling, but considering the time, cost, and assembly involved, this seems a lot harder than just going out and buying a traditional gun, which we’ll remind you is still unbelievably easy in America.

To see how the Solid Concepts 1911 3D-printed handgun compares to its plastic cousins, just watch this video that the company put out to explain the gun and to show it off a bit: