Buttercup, the Duck With a 3D-Printed Foot, Can Walk Normally For the First Time Ever 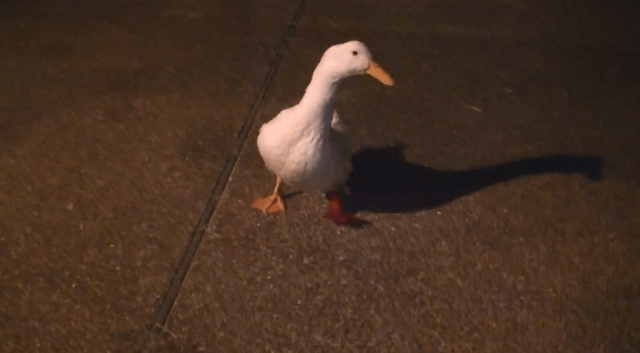 Buttercup the duck was born with a deformed foot that he hobbled around on for most of his ducky life, causing him a lot of pain and setting up the possibility of serious infections down the line. This is basically the saddest thing ever, so the Feathered Angels Waterfowl Sanctuary in Tennessee decided to team up with NovaCopy Inc. to provide him with a new 3D-printed prosthetic foot. Buttercup’s foot has been in the works for some time and gotten a lot of attention from the media, but it wasn’t until last night that the completed foot was finally fitted onto his leg and he was able to work normally for the first time. Even better, there’s video of his very first steps and yes, it’s as adorable as it sounds.

The prosthetic foot was modelled after that of Buttercup’s sister, Minnie, who was born with two perfectly healthy feet. Prosthetics are usually made by taking plaster casts of the intended body part; however, by instead scanning Minnie’s foot and printing a 3D mold, the Sanctuary was able to save a lot of money and effort, because you can bet getting a duck to hold still for a plaster cast is incredibly difficult. Prosthetics designers then took the mold and used it to create a new urethane rubber foot just for Buttercup.

Below is the promised video of Buttercup’s first steps. If you can watch his little butt wiggling as he waddles about without feeling any trace of joy in your heart, then you should probably seek therapy or something because you might have some emotional problems you need to work out. Seriously, this is heart-warming stuff right here.

There’s also video of his foot being put onto his leg, which is a little less squee-inducing and a little more grotesquely fascinating. Fair warning: if you don’t do well looking at images of human amputation stumps, you’re not going to do well with the duck version either. Stumps are just a little bit rough to look at no matter what species they’re on.