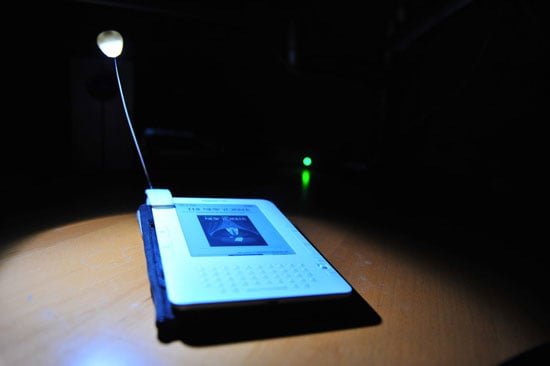 Reporters have held Amazon’s forthcoming illuminated E Ink Kindle in their hands, and rumors about three new devices being unveiled this year have been floating around for weeks. Now a new report says that we can look forward to seeing those new products beginning this July when Amazon is rumored to unveil the first of its new reading devices. The sooner we can put an end to doofy Kindle booklights, the better.

Citing an unnamed source, Reuters says that consumers can expect to see the illuminated E Ink Kindle for sale this July. Despite the addition of this much-needed new feature, Amazon is expected to keep the price the same for its E Ink line of eReaders — or perhaps increase the price very slightly.

Because E Ink only uses power when the page is refreshing, the battery life on these devices is usually measured in days and weeks instead of hours. The addition of an illumination system will no doubt have an impact on the battery life. However, TechCrunch writer Devin Coldewey suggested in his hands-on with a prototype of the device that new light-guiding technology could light up the screen while keeping power consumption to a minimum.

The Reuters report also touched on new Kindle Fires — the high-end, touchscreen tablet addition to the Kindle family. Last Holiday season, the Fire did extremely well and was played a large role in the December 2011 surge in tablets and eReaders. The news agency’s source says that consumers can look forward to a refreshed Fire for this Holiday season.

Any refresh of the Kindle line will be closely watched as Amazon has been a leader in eReaders and tablets (despite the iPad outselling the Kindle Fire, the device still commands over 54% of the Android tablet market). Especially since the eReader and tablet market becomes increasingly crowded; we’ve already seen a new illuminated E Ink NOOK already on the market backed by a deal between Barnes&Noble and Microsoft.

Amazon and Apple have dominated this budding industry thus far, but it’ll be interesting to see what the next round looks like.

(Reuters via Techmeme, image of a third-party Kindle light via Terry Chay)