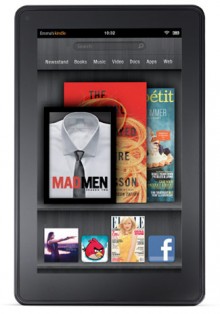 At Geekosystem, we’ve talked an awful lot about the rising popularity of eBooks which seems to have been driven in some part by the 2011 holiday season, where consumers bought up huge numbers of Kindle Fires and other tablet devices. However, it seems that Amazon’s buying frenzy was short lived, with shipping numbers for the Fire tanking in the beginning of 2012.

The news comes from International Data Corporation’s report on first quarter shipping numbers for tablet devices. While they predicted a steep drop off for tablet purchases across the board, the Kindle Fire’s drop in sales is staggering. According to their analysis, Amazon ended 2011 with 4.8 million units shipped — about 16.8% of the tablet market. In the first quarter of 2012, that figure dropped to around 4%; All Things D puts the figure at under 750,000 units.

This report is especially interesting, as Amazon generally declines to release sales figures on their products. Interestingly, Apple also shipped about 4 million fewer iPads in the first quarter of 2012, but that still amounted to a whopping 11.8 million tablets.

In their report, IDC credits Apple’s success to continuing sales of the iPad 2 after the release of the new iPad, and their efforts to market the iPad as an “all-purpose tablet.” The main selling point of the Kindle Fire, on the other hand, is as a handheld portal to Amazon’s media content, along with all the apps consumers have come to expect on tablets at an aggressive price. This would seem to suggest that consumers either don’t understand or don’t care about the close integration of media content on the Fire.

Though the Kindle Fire may be down, it’s certainly not out. Its huge sales this past holiday season have given it a foothold in the tablet wars. Moreover, the Kindle Fire is just one of Amazon’s devices, and will soon be joined by new additions to the family. As interesting as these numbers are, it will be even more intriguing to see how Amazon fares this next gift-giving season.

(IDC via All Things D via Techmeme)