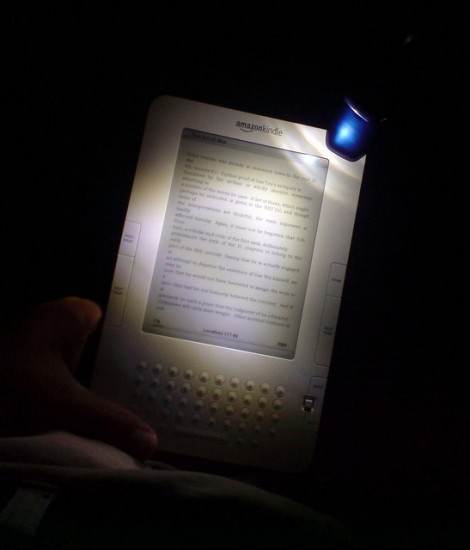 Despite the rumors that Amazon is going to launch three new tablet devices, the gargantuan retailer is apparently not ready to abandon the ultra-readable E ink display format for their Kindle eBook readers. TechCrunch has apparently been allowed to sit down with Amazon’s next generation E ink Kindle and reports that it will feature a long-awaited feature: Backlighting. The new device is apparently set to roll out sometime this year, and could bring an entirely new face to E ink readers as well as the end of reading lights for digital devices like the one pictured above.

The device I saw was crudely camouflaged in a sort of cardboard enclosure, but the screen was clearly visible. With a tap, a slider popped up on the screen, and as it was dragged to the right, the screen lit up evenly with a rather cool light. In the dark, it was plainly noticeable as a glow, and in uneven light — say, shade or a shuttered room — the slight illumination made the screen much more readable. At full blast it was definitely projecting some light (technically speaking it was reflecting it), but it was still a soft glow and not the harsh flashlight of a backlit LCD.

Unfortunately, Coldewey remains vague on the specifics of how the device is illuminated. He does, however, point to a patent filed by the illumination company Oy Modilis prior to their absorption into Amazon. Their technology is apparently at the heart of the new E Ink lighting system in these Kindles. The patent describes a novel method by which light from a single source is channeled into the screen area, where it bounces around before finally being directed outward toward the user. From the patent:

Coldewey writes that the advantage of this form of illumination is that it is not only bright and readable, but that it integrates well into the existing design of the E ink Kindle:

[…] the whole point of purchasing the light-guide company was to get the team and their patents, which essentially laminate the light diffusion layer right onto the screen without adding much in the way of depth or interfering with the touch system.

Bringing illumination to their E ink Kindles is a great step for Amazon. Their Kindle Touch is a near-perfect reading experience, which will surely be made all the better with an illuminated screen. Furthermore, their low-end devices will likely see greater acceptance by the general public by adding a new feature like this. It might even herald an even cheaper low end device without illumination, bringing eReaders into the realm of impulse purchases.

Having a backlit E ink screen might also finally pierce the hearts of those dead set against eReaders. Now they can not only carry thousands of books with them, read those books on the print-like E ink screen, but also do so in the dark. It’s the best of digital with the best of print.

Illuminated E ink screens also show a continued commitment by Amazon to the devices. Fans of their E ink Kindles can rest assured that despite a potential onslaught of new Fire tablets, E ink is here to stay.