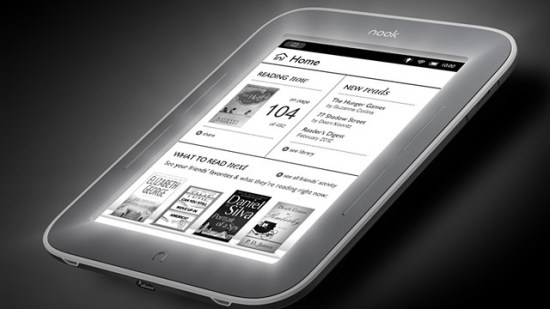 Finally, the written word may have conquered all possible lighting scenarios. The new Nook Simple Touch is available for pre-order today and it has both an eInk display and a front-lighting feature dubbed “GlowLight,” making it arguably the first eReader to be totally usable both in direct, glaring sunlight and also in the absence of any other light source. About time, am I right?

In their announcement of the new device, Barnes & Noble trots out some statistics about reading in bed that highlight the importance of the new development. Apparently, two-thirds of the people Barnes & Noble poled (likely to be big readers already) read in bed, and half of the ones with significant others would read in bed more often if it didn’t bother their bunkmate. The somewhat redundantly named GlowLight should solve that problem, and the problem of distracting reading lights in buses and cars and everywhere, really.

The use of the lighting comes at a price. For one, the tablet itself is $139, a modest price in the tablet world, but a far cry from a vanilla Nook Simple Touch at $99 or the cheapest Kindle at a mere $79. Also, using GlowLight will cut your Nook’s battery life in half, which sounds bad at face value, but really that only knocks it down from 2 months to 1 month, which is hardly a big deal. You can also adjust the strength of the glow, which you could probably use to squeeze a few more days out of the thing if you’re really in dire straights for some inexplicable reason. Naturally, the new Nook Simple Touch with GlowLight still has all the bells and whistles you can expect from a Nook Simple Touch without GlowLight: Rubber backing, infared touchscreen, etc. Curiously enough, the addition of GlowLight (okay, maybe the removal of something else, but still) makes this model lighter than the Simple Touches that have come before it.

So if you’re into eReaders and you’re into reading in the sun and in the dark, the Nook Simple Touch is worth a look. If you’ve been holding out, this might be the one for you. If you already have an eReader, I can’t imagine this is a “must upgrade” feature. Still, it’s cool and you should get one if you like reading on the evening buses. Especially when you are the kind of person who is likely to sit directly in front of or behind me.