This Fish Has Clear Blood, No Scales, But Still Has a Big Heart 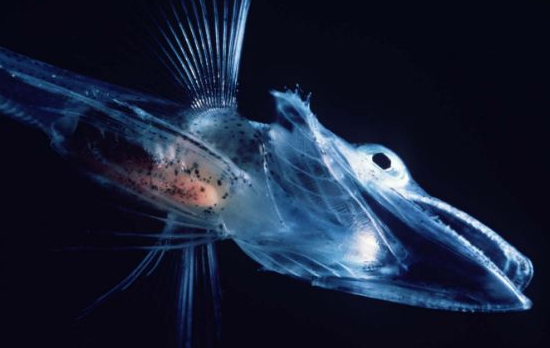 The deep ocean has all the coolest creatures. Fish lit with bioluminescence, giant isopods with writhing legs, gulper eels with whip-like tails and freakishly wide jaws. If it’s weird, glowing, or inhabits your nightmares, Earth’s depths probably have it. But have you heard of the Ocellated Ice Fish, the deep-dwelling aquatic vertebrate in the Antarctic Ocean that has completely transparent blood? It’s not scary, but it is exotic and its unusual physical traits don’t end there, either.

Experts at the Tokyo Sea Life Park — the only place in the world that has the specimen in captivity — say that its clear blood is due to the fish’s lack of hemoglobin, the iron-rich protein that gives blood its usual red color and helps ferry oxygen through the body. That alone makes this critter an anomaly among vertebrates. To compensate, the ice fish has a larger than normal heart, and it uses blood plasma to circulate oxygen.

But that’s not all. The fish also lacks scales — making it sort of like the Sphinx cat among fish — though experts believe it can absorb oxygen from the Antarctic waters with its skin. Plumbed from depths as much as 3,300 feet down, the Ocellated Ice Fish was brought to Japan by krill fisherman.

As yet, no one knows what evolutionary quirk triggered the loss of the Ocellated Ice Fish’s hemoglobin. On mysteries of this sort, nature itself is not transparent.

But now scientists have some specimens to study. An educational specialist at the Tokyo Sea Life Park, Satoshi Tada said, “Luckily, we have a male and a female, and they spawned in January,” and that having more of them might unlock some of the fish’s icy secrets.