James Cameron Donates His Submarine to Science | The Mary Sue

James Cameron Donates Submarine to Science, Puts All Other Directors to Shame 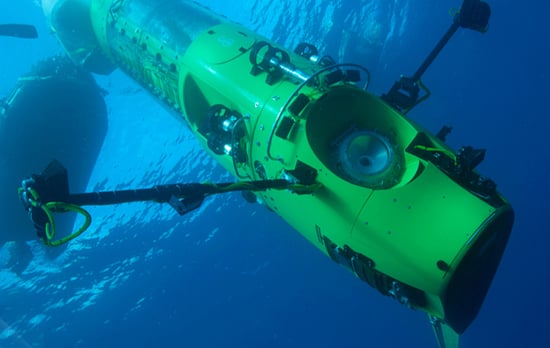 Tyrannical director, film producer, screenwriter, and self-proclaimed “king of the world” James Cameron, to be fair, has done a lot. Maybe he helmed his movies and projects with an ego and a serious dose of bluster, but the man is also a deep-sea explorer who leveled up the science of  aquatic cinematography and robotics. Now he’s doing it again, but this time by letting go of the wheel. Cameron has donated his own personal submersible — which, not coincidentally, looks like something out of The Abyss — to science. Specifically, to the Woods Hole Oceanographic Institution (WHOI), with which he’s had a longstanding relationship.

Just last year, Cameron took the human-piloted submersible, Deepsea Challenge (which is often in all caps, because he’s James Cameron), down into the Mariana Trench to a depth of 35,787 feet. Yeah, that’s the deepest part of our planet’s oceans and filled with scary monsters like this: 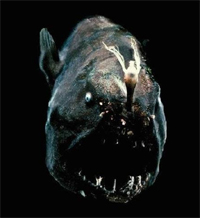 There’ve only been three such trips down that far, and Cameron was the first man to go it alone. The guy has guts and an obvious passion for the dark places where air is a commodity. Space and water-themed movies aside, he’s an advocate of stereoscopic digital 3D films and he’s made a number of IMAX oceanic documentaries, like Ghosts of the Abyss and Aliens of the Deep.

He even somehow managed to tweet from the depths in the Trench.

Yeah, show-off. As to why he’s given his submarine to WHOI, Cameron explained:

“The seven years we spent designing and building the DEEPSEA CHALLENGER were dedicated to expanding the options available to deep-ocean researchers. Our sub is a scientific proof-of-concept, and our partnership with the Woods Hole Oceanographic Institution is a way to provide the technology we developed to the oceanographic community.”

WHOI is all about deep submergence, and there seems to be no institution more suited to the continued deep-sea exploration. The question remains, though: What will WHOI do with the sub now that they’ve got the keys?

Well, after presumably tearing around the ocean with it like those garage attendants did in Ferris Bueller’s Day Off, the scientists intend to use the advanced cameras and lighting systems from Deepsea Challenger on a different craft, the Nereus, which also went down into the Mariana Trench a few years back.

Wait. That sounds like they’re just going to scavenge it for spare parts. Hmm. Well, he’s not exactly just handing them the sub and walking away. Susan Avery, president and director of WHOI, said:

“We are delighted that Jim has agreed to join the Center’s Advisory Board, a group distinguished by its members’ deep experience and commitment to ocean science. By virtue of much of his work in the ocean, he is in a perfect position to provide fresh perspectives on the challenges we face.  It’s just one manifestation of the kind of sustained partnership developing between WHOI and the Cameron team.”

Well, whether Cameron’s donation is an act of altruism or just some good publicity, it kind of doesn’t matter. Science got a new toy with which to play.

(WHOI.edu via io9, images courtesy of National Geographic and ILTWMT)