Sharks With Frigging Lasers On Their… Spines? We’ll Take It 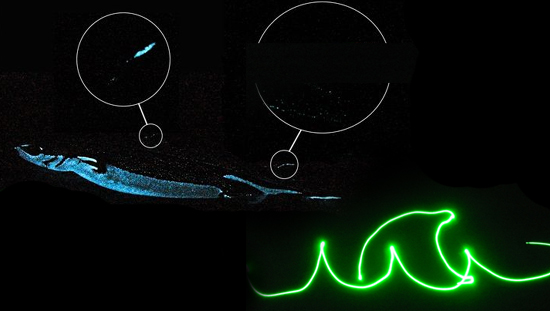 There’s no reason to be afraid. Sharks don’t have lasers on their heads yet (that we’ve found), but we’re getting closer and closer to discovering Dr. Evil’s dream fish. Granted, you have to dive pretty deep to find the velvet belly lanternshark that uses lightsaber-like spines to warn off predators. Then again, we feel that the last half of that sentence makes the first half totally worth it. The shark’s glowing spines are just half the story, though — hit the jump and find out what else they can do.

The velvet belly lanternshark is a less than intimidating shark — averaging just 18-inches long — living in the deep waters of the northeast Atlantic Ocean. Biologists already knew about the bioluminescence of their bellies to effect counter-illumination — a process that helps to render them invisible to predators. When seen from below, the light obscures the shark’s silhouette, camouflaging it against light filtering down from the surface above.

In a study from biologists Julien Claes and Jérôme Mallefet from Belgium’s Catholic University of Louvain, they discovered that lanternsharks had another trick up their bioluminescent sleeves. Some 2-foot-long specimens were caught in Norwegian fjords and placed in darkened aquarium tanks. To the researchers’ surprise, not only did the sharks’ bellies glow, so did two spines on the front edges of their dorsal fins.

"I'm prettier in the dark."

Called photophores, the light-emitting cells that formed these rows are not especially bright. Based on their knowledge of the eyesight of other deep-diving animals, though, the researchers deduced that the spines would be perfectly visible to certain predators. Notably, the harbor seal, the harbor porpoise, and the blackmouth catshark, all of whom would probably consider a velvet belly lanternshark a delicious, nutritious snack. What can we say — aquatic predators aren’t generally super-picky eaters.

The lanternshark’s glowing spines aren’t especially dangerous, but by lighting up, they project a warning to their would-be hunters: “Look, if you want to take a bite, it’s going to hurt.” Meanwhile, the sort of prey lanternsharks go after have poor vision and would hardly notice their natural glow-sticks.

Of course, these fish aren’t the only ones with creative use for glowing bodies. Edith Widder, founder of the Ocean Research & Conservation Association, has said that up to 90% of animals living in the open ocean can produce light. Depending on the species, bioluminescence is used to warn predators, ensnare prey, or attract mates. But the velvet belly lanternshark is the first among glowing sharks to have different uses for two different light-emitting parts of the body — to hide from predators below and to warn predators from above.